SEOUL, May 11 (Yonhap) -- A Seoul civic group advocating for Korean victims of Japan's wartime sex slavery said Monday it has spent more than 40 percent of public donations on the victims over the past three years, denying accusations of their opaque expenditures.

The Korean Council for Justice and Remembrance for the Issues of Military Sexual Slavery by Japan said in a news conference that it collected 2.22 billion won (US$1.82 million) in donations from 2017 to 2019 and spent 911 million won, or 41 percent, on supporting Korean sex slavery victims.

The council said there has been no problem in its spending of public donations, insisting that a simple delivery of donated money to the sex slavery victims is only a part of its victim support projects. They include assistance in their medical treatment, support of their human rights and honor restoration activities, regular travel, support for their emotional stability and management of their shelter. 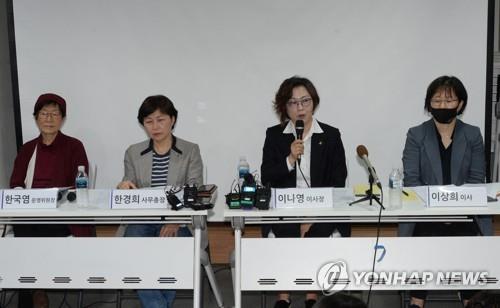 The conference came four days after Lee Yong-soo, one of the surviving victims of Japanese military sexual slavery, told reporters last Thursday that the civic group has not used the public donations for the victims transparently and the victims have been exploited by the civic group and others for the past 30 years.

The 92-year-old Lee then vowed to stop participating in the weekly Wednesday rally that the civic group has organized in front of the Japanese Embassy in downtown Seoul since 1992 to protest against Tokyo's wartime atrocities.

She also claimed that the civic group has collected donations from students and other people during the weekly Wednesday rallies, but the money has not been spent on her and other victims.

Lee went on to personally criticize Yoon Mee-hyang, a former leader of the civic group, asking her to resolve the problems associated with the civic group and step down from the National Assembly.

Yoon won a National Assembly seat in April on the proportional representation ticket of the Together Citizens' Party, a satellite party of the ruling Democratic Party.

Yoon denied Lee's accusations the following day by writing on her social media account that all the donations collected by the group were subjected to thorough oversight and were used properly. On the same day, the civic group also issued a statement saying it has regularly received an audit on its spending of donations and made public the audit results.

Historians say up to 200,000 women, mostly Koreans, were coerced into sexual servitude in front-line Japanese brothels during World War II when the Korean Peninsula was a Japanese colony. Those sex slaves were euphemistically called comfort women. There are now 18 surviving victims in South Korea.

The civic group said it collected 4.6 million won in donations from Wednesday rally participants last year, and the whole sum was spent on hosting the weekly rallies, which it said cost 110 million won annually.

"We humbly accept regrets, anxiety and resentment of our grandmothers who have campaigned together with us over the past 30 years. I sincerely apologize to our grandmothers for hurting their heart," Lee Na-young, president of the civic group, said in the news conference.

The brutality of Japan's sex slavery first surfaced in 1991 as the late Kim Hak-soon first publicly testified about her experience. Since then, victims and activists have persistently demanded Japan's apology, which Tokyo has rejected.

In December 2015, the then Park Geun-hye administration signed a deal with Tokyo to "finally and irreversibly" resolve the issue. The deal included a 1 billion-yen donation to a foundation dedicated to supporting surviving victims.

The civic group denied allegations that it had forced surviving comfort women not to accept the money from the Japanese government. It also denied knowing about the planned donation of 1 billion yen from Japan prior to its formal announcement in December 2015.