SEOUL, May 11 (Yonhap) -- K-pop idol rock band DAY6 is set to release a new album, "The Book of Us: The Demon." on Monday as scheduled, although the band will temporarily halt its activities due to some members' anxiety disorders, its agency said.

"After some members complained of anxiety recently, they went through a medical test and got a doctor's order to take a sufficient rest," JYP Entertainment said on its official website, one day ahead of the album release.

"In order to focus on the recovery of health, (we) decided, through careful discussion with the DAY6 members, that the activities of the entire band will temporarily be put on halt, including (the promotion) for this album," according to JYP.

JYP also said it will issue a notice when the group's activities are resumed.

Despite the temporary leave of absence, the new album will be released Monday evening as planned, the management agency said.

Led by lead single, "Zombie," "The Book of Us : The Demon," the band's sixth EP, explores the story of sentimental imbalance.

Members Young K and Wonpil participated in writing the lyrics of "Zombie," while Jae jointly composed it, according to JYP. The single delves into the sentiment of despair from a lopsided mind. 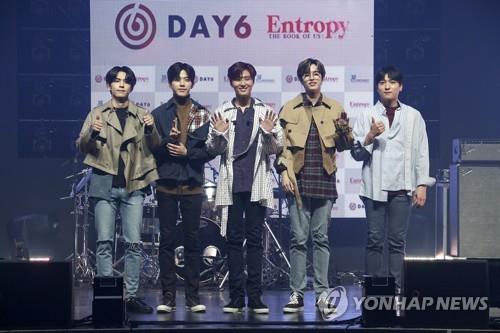