SEOUL, May 12 (Yonhap) -- South Korea released the first images sent back by its environment monitoring satellite that clearly shows waters around the Korean Peninsula, the science ministry said Tuesday.

The Chollian-2B, the country's first geostationary satellite launched from French Guiana on Feb. 18 (local time) and now at a fixed orbit some 35,786 kilometers above the equator, provided better-than-expected initial photos of the Northeast Asian region, according to the Ministry of Science and ICT. 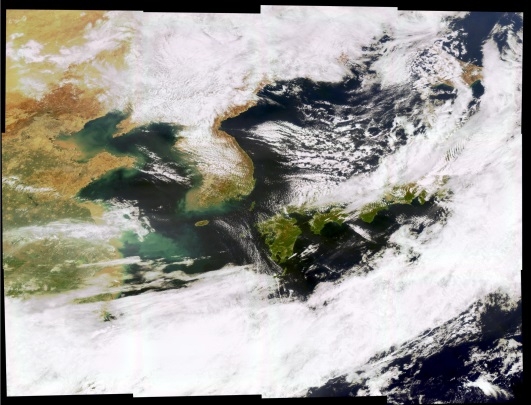 The 3.4-ton satellite stationed at 128.25 degrees longitude took the images on two different occasions, once on March 23 and the second time on April 21 and the following day. The images were taken to test the cutting-edge Geostationary Ocean Color Imager-2 (GOCI-2).

"The first images have not been appropriately corrected, but they are still very sharp, underlying the excellence of the Chollian-2B," the ministry said in a release.

Compared with the existing Chollian-1 satellite, the spatial resolution is four times better, making it possible for the satellite to check ports, seaside facilities, bridges and changes in the water conditions near land, as well as oil spills.

In addition, the satellite has four more observation bands compared with the former satellite, which can utilize everything from ultraviolet through near infrared.

The ministry said scientists will optimize and calibrate the GOCI-2 in the coming months so that full-fledged image services can start in October as planned.

Besides the maritime imager, the Chollian-2B is equipped with the Geostationary Environmental Monitoring Spectrometer (GEMS) with "machine learning" capabilities that can observe and track fine dust and 20 types of air pollutants, including ozone, sulfur dioxide and formaldehyde.