SEOUL, May 12 (Yonhap) -- South Korea's tourism revenue slumped to a nine-year nadir in March due to the impact of the coronavirus pandemic, industry data showed Tuesday.

Revenue from inbound travelers reached US$729.8 million in March, down a whopping 67 percent from a year earlier and the lowest since January 2011, according to the data compiled by the Korea Culture and Tourism Institute.

Spending by outbound travelers stood at $881.5 million, 60 percent lower than a year earlier.

Asia's fourth-largest economy thus registered a tourism deficit of $151.7 million in March, compared with a $365.2 million shortfall in February. 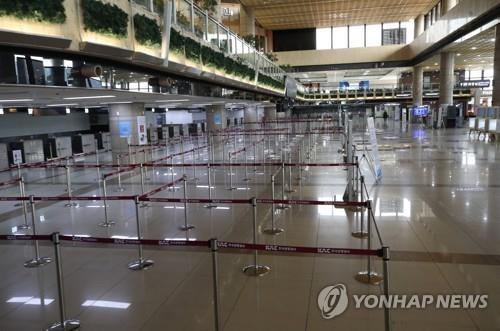 March's deficit was also the lowest in a year as both tourism revenue and spending decreased due to the COVID-19 outbreak.

The pandemic brought the global tourism industry to a halt in March, leading to a nosedive in the number of foreign tourists to South Korea and vice versa. Social distancing measures in South Korea also sent demand for domestic tourism tanking.

The number of foreign travelers to South Korea tumbled nearly 95 percent on-year in March, with that of outbound tourists plummeting about 94 percent.

The pandemic wreaked havoc on South Korean tour operators. No. 1 travel agency HanaTour chalked off nearly zero sales in March as demand for its overseas tours sank more than 99 percent.

Industry watchers expected South Korea's tourism sector to remain in the doldrums down the road before the coronavirus outbreak recedes both at home and abroad.
(END)