SEOUL, May 12 (Yonhap) -- An Army officer has tested positive for the coronavirus, becoming the military's eighth case linked to clubs in Seoul's Itaewon district, while most other military personnel suspected of links to Itaewon clubs or visitors tested negative, the defense ministry said Tuesday.

The new case brought the total number of COVID-19 infections among the military population to 47.

The latest patient, a first lieutenant based in Yongin, south of Seoul, is believed to have contracted the virus after coming into contact with an Army captain working at the same compound, who was infected with the disease after a visit to Itaewon clubs earlier this month.

The other six cases came from the Cyber Operations Command in Seoul, where a staff sergeant tested positive for the virus Friday following a visit to Itaewon clubs and bars earlier this month. Five of his colleagues -- four senior officers and an enlisted soldier -- were found to have contracted the virus.

In the wake of the series of infections, the entire staff of the Cyber Operations Command was tested for the virus, and all of them, excluding the six, tested negative, according to the ministry.

Of 49 military individuals who reported to the authorities their recent visits to entertainment facilities in Itaewon, 46 tested negative, and the remainder are awaiting results, according to the ministry.

The 49 people, including 32 trainees for mandatory military service, voluntarily reported their recent visits to those facilities after authorities issued a notice that all those who visited Itaewon clubs should come forward and get tested.

"The voluntary reporting period finished on Monday, but we've since got three more cases. They will also undergo the virus test soon," a ministry official said.

Currently, around 1,159 military personnel have been quarantined as a precaution in accordance with the military's strict coronavirus prevention guidelines. In terms of the ordinary guidelines for civilians, 195 of them are required to remain in isolation, the ministry said.

Since last week, South Korea has seen an unexpected surge in confirmed virus cases linked to Itaewon, with the total number of cases connected to a cluster infection from the nightlife facilities standing at 94 as of Monday.

On Tuesday, the country reported 27 more cases of the new coronavirus, bringing the total infections to 10,936, according to the Korea Centers for Disease Control and Prevention (KCDC). 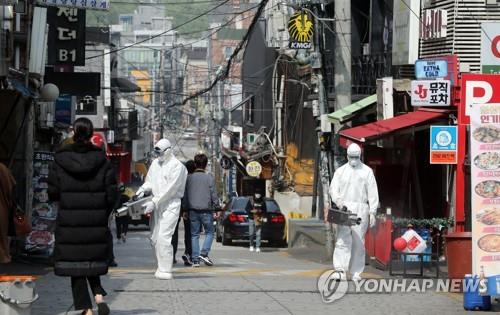