SEOUL, May 12 (Yonhap) -- The number of abandoned animals in South Korea climbed 12 percent on-year to more than 130,000 in 2019 with dogs taking up the bulk, government data showed Tuesday.

A total of 135,791 dogs, cats and other pets got deserted or lost last year, compared with 121,077 a year earlier, according to the data compiled by the state-run Animal and Plant Quarantine Agency.

Dogs accounted for 75.4 percent of the total, with cats making up 23.5 percent.

It cost 23.2 billion won (US$18.9 million) to operate 284 nationwide shelters for those ownerless animals last year. 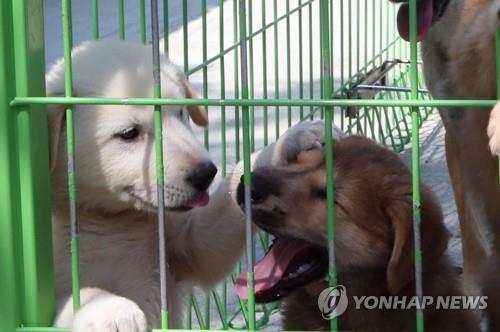 Most of the stray dogs and cats went to a new owner or were euthanized, with only 12.1 percent returned to their original owners.

Nearly 65,000 wild cats were neutered or spayed last year at a cost of 9 billion won.

The number of newly registered dogs came to 797,081 last year, up a whopping 443.6 percent from the prior year, with the cumulative number reaching slightly over 2.09 million.

The figure has been on a rise since 2014, when South Korea's revised quarantine laws took effect, requiring all pet owners to register and microchip their cats or dogs that are more than 3 months old for a nationwide pet identification and recovery service.