SEOUL, May 12 (Yonhap) -- An appellate court on Tuesday reduced the prison sentences of Jung Joon-young and Choi Jong-hoon, two South Korean singers convicted of rape and other crimes, by one and 2 1/2 years, respectively.

The Seoul High Court sentenced Jung, a disgraced singer and TV personality, and Choi, a former member of boy band FT Island, to five years and 2 1/2 years, respectively, in prison on charges including sexually assaulting women in 2016.

The commutations came after Jung and Choi received prison terms of six and five years, respectively, from a Seoul district court last November. 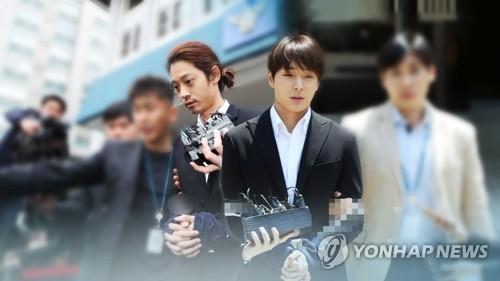 Jung and Choi, both 31 years old, were convicted of raping women during drinking parties in Hongcheon, Gangwon Province, in January 2016 and in Daegu in March of the same year, together with other members of a mobile chat room.

Prosecutors demanded prison sentences of seven and five years, respectively, for Jung and Choi in the previous hearing at the appellate court.