SEOUL, May 12 (Yonhap) -- U.S. Deputy Secretary of State Stephen Biegun may feel deprived of the chance to savor his favorite Korean chicken stew in Seoul, given the lack of in-person diplomacy amid the coronavirus pandemic.

But it has certainly not stopped him from making the dish at home.

A video clip released Tuesday by U.S. Ambassador to South Korea Harry Harris in a tweet showed the deputy secretary, wearing a white apron, cooking "dakhanmari" for his wife in celebration of Mother's Day.

In the clip, Biegun successfully flipped "hobakjeon" -- Korean Zucchini pancake -- on a frying pan and pulled a chicken out of a boiling pot.

"Pleased to see DepSecState Steve Biegun cooking #dakhanmari (+hobakjeon + mandu + a wee dram of soju!) for his wife in celebration of Mother's Day. Quite the deft touch on the hobakjeon flip. Mr. Sec'y! Thanks to his favorite restaurant in Seoul for providing the secret recipe," Harris wrote.

Biegun, who doubles as top nuclear negotiator for North Korea, is known to enjoy dakhanmari, literally meaning, "one chicken."

It has apparently become almost a ritual for him to have a bowl of it every time he visits Seoul for negotiations with his South Korean counterparts, as he was spotted many times by local media dining out with his team at a dakhanmari restaurant downtown.

Biegun and his South Korean counterpart for North Korea nuclear talks, Lee Do-hoon, have continued discussions on the issue through phone calls since they last met face-to-face in Washington in January.

Their last phone talks took place on April 28 amid speculations at the time over the health and whereabouts of North Korean leader Kim Jong-un due to his weekslong absence from the public eye. 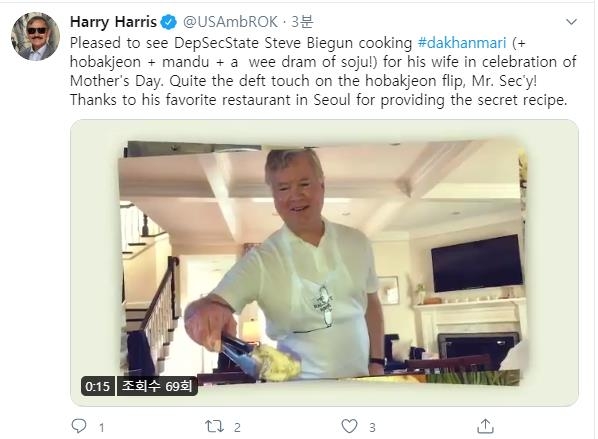