SEOUL, May 12 (Yonhap) -- The labor union of South Korean employees for the U.S. Forces Korea (USFK) thanked the government Tuesday for enacting a special law providing financial support for furloughed workers, while calling on the United States to swiftly clinch a defense cost-sharing deal.

To support the furloughed employees, the National Assembly passed the special law late last month that calls for providing relief funds of around 1.8 million won (US$1,476.6) to 1.98 million won per month per employee, around 60 percent of their average monthly wages.

The legislation was approved during a Cabinet meeting Tuesday.

"Now that the special law has been enacted, Korean workers are no longer hostage in the negotiation," the labor union said in a release, expressing gratitude for the government that "expressed a strong will to protect the people."

The negotiations have been stalled since U.S. President Donald Trump rejected Seoul's offer as insufficient. Washington has asked Seoul to pay $1.3 billion per year, a nearly 50 percent increase from last year, while Seoul says its best offer stands at a 13 percent increase.

"Furloughed workers are suffering from greater hardship, and those on duty have also been worn out due to the excessive workload," the labor union said, urging the U.S. government "to withdraw the furlough and to swiftly conclude the agreement for the USFK's normal operations."

It then called for fundamental solutions by revamping terms of their labor contracts. Currently, Korean workers for the USFK are hired by the U.S. military, not by the South Korean government. 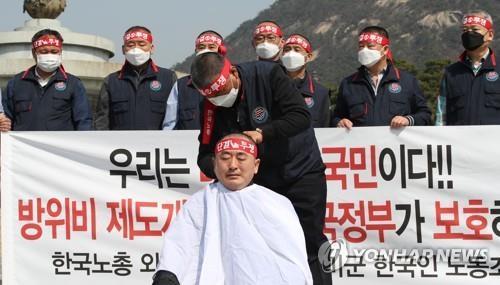