The pair of bombers took off from Andersen Air Force Base in Guam, transited airspace southeast of South Korea and west of Japan and flew over the East China Sea, Aircraft Spots tweeted without specifying the exact time of the operation.

The U.S. usually sends bombers and surveillance planes to the Korean Peninsula in the wake of North Korea's provocations or on routine flight training missions. 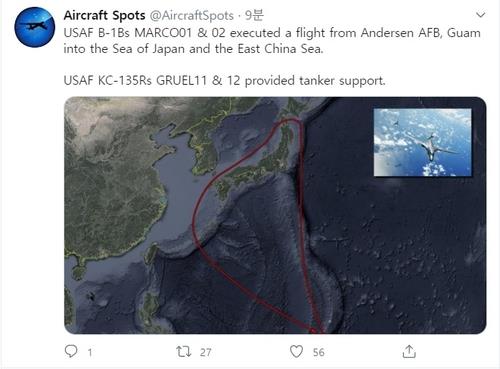 The U.S. has deployed four B-1B bombers and some 200 relevant personnel at the Andersen Air Force Base.

Earlier in the day, the U.S. Air Force's RC-135W Rivet Joint and RC-12X Guardrail flew over Seoul and the nearby western port city of Incheon, according to military authorities.

The RC-135W is meant to intercept telemetry signals before missile launches, while the RC-12X Guardrail, operated by the U.S. Forces Korea, is an airborne collection platform of signals intelligence.