SEOUL, May 13 (Yonhap) -- Credit card spending in South Korea fell at a slower pace in April than a month earlier amid signs of the coronavirus outbreak easing, data showed Wednesday.

Credit card purchases approved by the country's eight card firms -- Shinhan, Samsung, KB Kookmin, Hyundai, BC, Lotte, Woori and Hana -- reached 54.6 trillion won (US$44.5 billion) last month, down 2.9 percent a year earlier, according to the data from the office of Rep. Park Kwang-on of the ruling Democratic Party.

April's decline represents a slowdown from March's 6.7 percent on-year shrinkage, which is seen as an indication of a slight recovery in consumer confidence in Asia's fourth-largest economy.

Credit card spending gained 4.6 percent and 5.2 percent in January and February, respectively, before tumbling in March due to the fast spread of COVID-19. 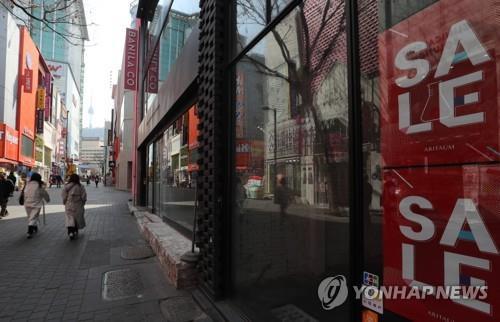 March marked the first time that overall credit card spending has dropped on-year since April 2014 in the aftermath of the Sewol ferry sinking that claimed more than 300 lives.

April's slowed decrease came amid signs of the coronavirus outbreak waning in the country.

South Korea had added fewer than 15 daily cases since mid-April, with the number of domestic infections even falling to zero at some points before double-digit figures were reported recently due to a cluster infection linked to clubs and bars in Seoul.

According to the data, online card spending jumped 21.3 percent on-year to about 9.7 trillion won last month due to increased teleworking and social distancing measures. In the first four months of the year, online credit card purchases surged 25 percent from a year earlier.

In contrast, offline credit card purchases fell 6.9 percent on-year to 44.8 trillion won in April. The decrease slowed from an 11.8 percent drop in March.

The virus outbreak has forced many citizens in South Korea to avoid non-essential outings and purchase food and other daily necessities online.
(END)