SEOUL, May 13 (Yonhap) -- North Korea is believed to have replaced the chief of its primary intelligence agency accused of a string of secret operations against South Korea, including the 2010 sinking of a warship, according to Seoul's latest who's who in Pyongyang's ruling elite.

Rim Kwang-il, an army general, replaced Jang Kil-song last December as head of the Reconnaissance General Bureau, the North's military intelligence agency, according to the who's who book, titled "Information on key figures in North Korea."

The agency is known for masterminding the 2010 torpedo attack on the South Korean naval corvette Cheonan that killed 46 sailors on board. Leading the agency at the time was Kim Yong-chol, a hawkish general who later served as the counterpart of U.S. Secretary of State Mike Pompeo in nuclear negotiations.

Kim was replaced by Jang as he was named in the same year to lead the United Front Department (UFD), a key party organ dealing with inter-Korean affairs.

Born in 1965, Rim was promoted to lieutenant general in 2017. He was presumed to have been appointed as a member of the ruling party's central military committee last December, the data showed.

The data did not provide other details on the reason for the replacement. Rim's appointment has not been mentioned in Pyongyang's state media reports yet. 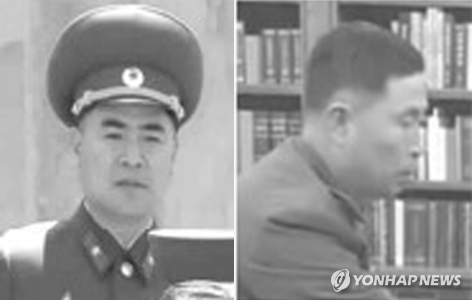 North Korea is also presumed to have replaced Yun Jong-rin with Kwak Chang-sik in April last year as the Supreme Guard commander in charge of security for leader Kim Jong-un.

Kwak is a little-known figure to outside observers, but his name started to appear in state media reports last year. He was appointed as a member of the ruling party's central committee last December, the data showed.

Jang Kum-chol was also presumed to have replaced Kim Yong-chol as head of the UFD in April last year, according to the data. The replacement has been widely speculated after Seoul's spy agency said so early last year, but Jang's appointment has not been officially confirmed yet by North Korea.

The data on North Korean personnel was based on the North's state media reports and intelligence analysis. The unification ministry has published updated info books on the North every year.

A ministry official said about 80 percent of the political bureau, a powerful party organization, and the cabinet have been replaced by new members over the past year in what appears intended to consolidate leader Kim's grip on power by appointing more close aides to key posts.