SEOUL, May 13 (Yonhap) -- Municipal authorities of Incheon, west of Seoul, said Wednesday they are planning to file a criminal complaint against a private academy instructor for lying about his occupation after his recent visit to a club in Seoul's Itaewon district, which has resulted in a cluster of coronavirus infections involving himself and 11 others, including his students. 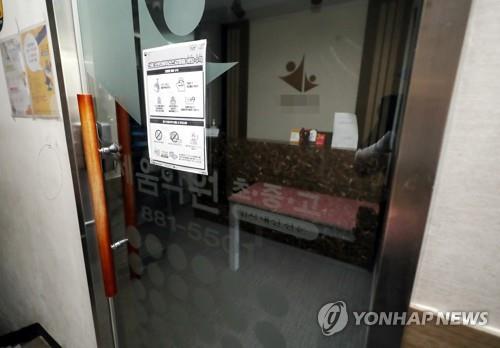 So far, five high school students attending the Incheon academy have tested positive for the coronavirus. A female middle school student privately tutored by him, her twin brother and their mother have also contracted the virus. In addition, the twin brother's private tutor and one of the academy's instructors have been confirmed to be infected.

Quarantine officials are seeking to prevent infections among people who have come into contact with the 11 patients related to the academy.

For instance, they plan to conduct coronavirus tests on about 1,000 people who went to Sunday services at two separate churches in Incheon, which were allegedly attended by some of the patients.

Meanwhile, public outrage has mounted over the instructor's dishonesty and his visit to a crowded club amid the social distancing campaign.

"At first, the man said he has no job but confessed later he is an instructor. How come he's that irresponsible as a teacher?" said an Incheon citizen in an online cafe.

South Korea on Wednesday reported 26 more coronavirus cases following the cluster infection linked to clubs and bars in Seoul. The number of cases connected to bars and clubs in Itaewon has approached 120 amid growing concerns over a possible new wave of infections.