SEOUL, May 14 (Yonhap) -- His term as the U.S. Ambassador to South Korea may have ended three years ago, but Mark Lippert continues to serve as an envoy for South Korean baseball in Washington.

The Korea Baseball Organization (KBO) is enjoying newfound fame this month, with the U.S. sports cable giant ESPN carrying six live games per week. It's the only live baseball available on U.S. television, as Major League Baseball (MLB) has been unable to begin its season due to the coronavirus pandemic.

And Lippert, who became a fan of the KBO club Doosan Bears during his term here from 2014 to 2017, is glad to promote the KBO brand of baseball for anyone who is interested or curious. 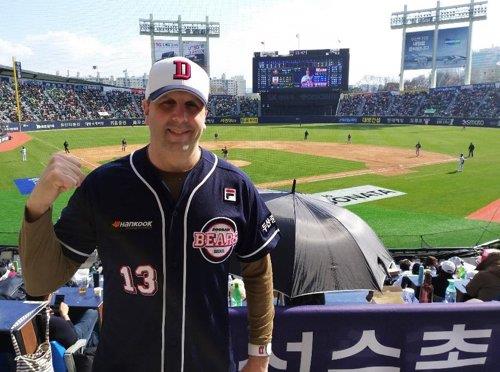 "It's the complete package: great baseball, great players, great action, great fans and with a uniquely Korean twist," Lippert said in a recent interview with Yonhap News Agency. "There is something in it for everyone -- baseball expert, casual fan, foodies, music lovers or for folks who are just curious about Korean culture."

Now a senior adviser for the Center for Strategic and International Studies think tank, Lippert said it is "not hard at all" to watch weekday games on ESPN, despite the odd hours in the Eastern Standard Time (EST) zone, given the time difference. A weekday game in the KBO begins at 5:30 a.m. EST, while weekend games begin at 1 a.m. or 4 a.m. EST.

In the past, he would wake up early and watch games on the Korean portal site Naver, which streams KBO games, while walking his dog, Grigsby, or making breakfast for his two South Korean-born children, Sejun and Saehee.

"This year, it's been especially fun because I can watch live on ESPN and follow the chat rooms and live (text) updates of other games on Naver," Lippert said. "Later in the day, I can catch the replays. It's been great!"

Lippert said he thinks the U.S. exposure for the KBO will "leave an indelible mark in the minds of MLB fans that there is a very special professional league in Korea, and that the KBO deserves, at the very least, some significant space in the professional baseball conversation and consciousness."

"I do think there will be a lasting impact," Lippert added. "I also hope it will lead some (American) fans to go to Korea to watch games in person because there is nothing, and I mean nothing, like a KBO game." 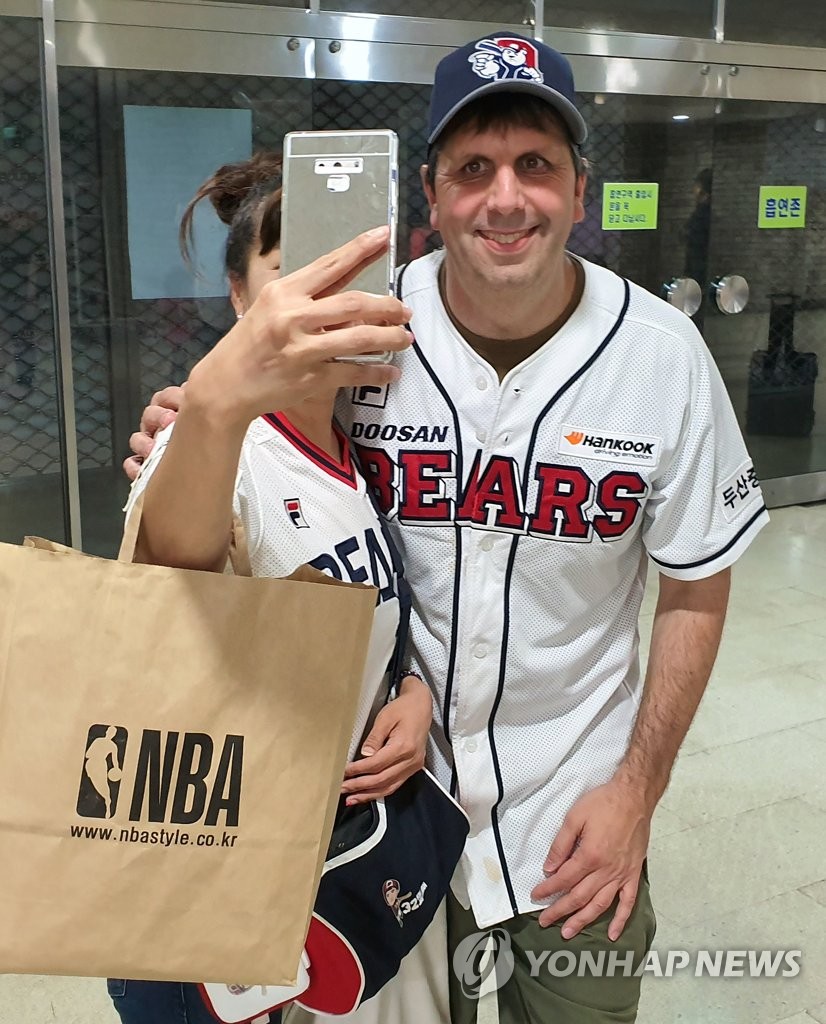 Lippert himself has traveled to South Korea to watch a few KBO games, including the Bears' home opener in the 2019 season. His last games were Games 1 and 2 of the 2019 Korean Series; the Bears won those games in their last at-bats in the bottom of the ninth inning, and went on to sweep the Kiwoom Heroes for the third title in five years.

"I just miss being in the stadiums -- fan culture and the food. I also miss traveling around Korea to see the games. Since I left Korea as ambassador, I have made it to games in six of the nine ballparks, and we always make it a point to go out and have some fun in the cities before and after the games," he said, adding that he usually finds fun regional restaurants and eats local food. "People still recognize me."

Lippert shared one particular story: He and a friend traveled to Gwangju, 330 kilometers south of Seoul, to watch the Bears play the Kia Tigers in 2018. When they walked out of the KTX station, Lippert was instantly recognized by a cab driver, who instantly started yelling, "Yagujang!" the Korean word for "baseball stadium."

Lippert's KBO fandom also led to some indelible moments for the former ambassador in Washington.

While he's a Bears fan, he makes sure to wear the jersey of a different KBO team, the Lotte Giants, when he attends games for the Washington Nationals in the U.S. capital. Lippert has the Giants' throwback road jersey in powder blue with red letters, and it has resemblance to the old jersey for the Montreal Expos, a franchise that moved to Washington and became the Nationals of today.

Once, Lippert went to a Nationals game wearing that Lotte jersey. The game happened to feature a South Korean player from the opposing team, and there were many Korea and Korean-Americans in the stands. Those who either recognized Lippert's jersey or Lippert the ex-ambassador -- or both -- swarmed him for selfies, prompting the stadium usher that had been sitting next to him to ask, "Who are you?"

A couple of days later, Lippert went to another Nationals game, again in his Lotte uniform and in the same area of the stadium, with the same usher now wearing an amused look. This time, Lippert was spotted by a familiar face -- one of his former body guards in Seoul who had traveled to Washington for a State Department training course.

For Lippert, seeing that former body guard wasn't the end of it; the body guard had a better ticket than his former boss.

Lippert's ties with South Korea run deep. Sejun and Saehee -- both of whom have also become KBO fans -- were born here, and Lippert's presence at KBO stadiums endeared him to the South Korean public and made him approachable in ways that his predecessors weren't.

"The Lippert family and Korea are going to be intertwined," he said. "In fact, in my farewell speech as ambassador, I made this point, by saying, '(The Korean people) touched us deeply. I know your future is bright. And we intend to return many times to witness it, partake in it and be inspired by it.' We're just living what I felt and continue to feel about Korea." 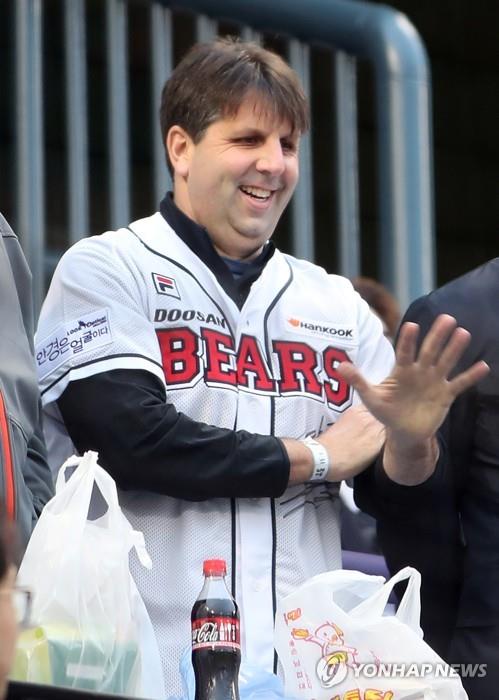 Though travel restrictions are keeping Lippert from flying to South Korea to watch his Bears, he's keeping close tabs on the club's fortunes.

Asked about his thoughts on the Bears' chances of defending their title, Lippert said the key is to address the loss of Josh Lindblom, a 20-game winner and reigning league MVP who has since signed with the Milwaukee Brewers.

"But, this highly talented core team is back for another ride. And this is a group that, we have seen time and time again, knows how to win," Lippert added. "So, I like their chances. More broadly, just like last year, I think this is going to be another very exciting KBO season. I'm excited for the Bears but also the season!"

Lippert grew up a fan of the Cincinnati Reds. His father was a season ticket holder for the Reds, and Lippert was one of more than 47,000 fans at the old Riverfront Stadium on Sept. 11, 1985, when Pete Rose got his 4,192nd hit to pass Ty Cobb as the all-time leader in the majors.

His immediate reaction to the question was, "Good grief. Are you going to make me pick between Sejun and Saehee next?"

"Being an ambassador is all about keeping Washington and Seoul out of zero-sum choices for the alliance," he said. "So I hope if my skill set is still intact. I'd find a way to watch both!!!"