SEOUL, May 13 (Yonhap) -- Foreign Minister Kang Kyung-wha held a teleconference on Wednesday with South Korean ambassadors in six countries and the European Union (EU) to discuss measures in fighting the novel coronavirus, the foreign ministry said.

Ambassadors to the United Kingdom, Germany, France, Italy, Spain, Russia and the EU took part in the talks, the ministry said in a press release. 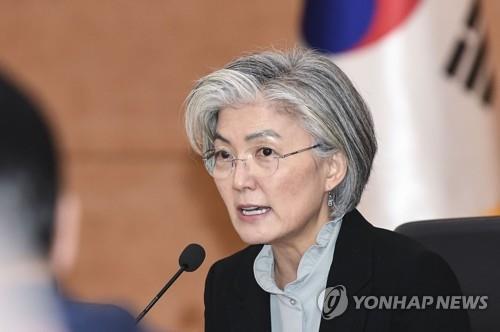 During the talks, Kang noted South Korea's increased role in the international community amid the coronavirus crisis and stressed the need for diplomacy to adapt to the new environment, including the use of teleconferences.

Twenty-six new cases of COVID-19 were reported Wednesday, with 18 of them tied to nightclubs and bars in the popular nightlife district of Itaewon in downtown Seoul, bringing the nation's total coronavirus cases to 10,962, according to the Korea Centers for Disease Control and Prevention.