SEOUL, May 14 (Yonhap) -- The Korean language proficiency test slated for later this month in over 60 countries worldwide has been canceled due to the coronavirus pandemic, its organizer said Thursday.

Seoul's National Institute for International Education said it has canceled the 69th Test of Proficiency in Korean (TOPIK), scheduled to take place in 64 countries, including South Korea, on May 24, for fears of community spread of COVID-19.

The education ministry-affiliated institute noted that South Korea's alert status on the novel coronavirus still remains at the highest "serious" level amid fears of a second wave of infections traced to a Seoul entertainment district. 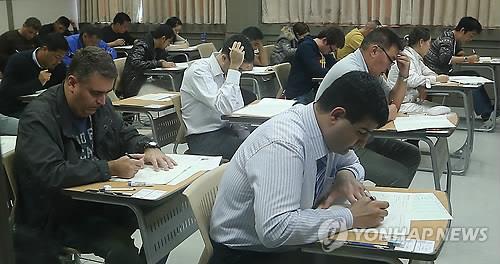 The institute had planned to administer TOPIK, a language proficiency test for foreigners whose native language is not Korean, six times in South Korea and five times outside the country in 2020.

It said Taiwan, praised for its successful pandemic response, will be the sole exception and TOPIK will be held in three Taiwanese cities -- Taipei, Kaohsiung and Taichung -- on May 24 as scheduled.

Exam fees will be fully refunded for the canceled tests, and applications for a refund will be possible on the TOPIK website.

The institute had announced as recently as April 27 that schedules for the 69th TOPIK remained unchanged but has changed its position, as confirmed coronavirus cases linked to nightspots in Seoul's Itaewon district soared.

It said the 70th TOPIK will take place July 12, but scheduled changes cannot be ruled out depending on the spread of COVID-19.