SEOUL, May 14 (Yonhap) -- An Incheon high school senior, who attended a private academy class taught by a instructor who lied about his occupation after his visit to a coronavirus hotbed in Seoul, and the student's mother have tested positive for the virus, authorities said Thursday.

The two new infections raised the number of cases in Incheon tied to the latest cluster infection to 13.

Incheon's municipal government said the 18-year-old student, who recently received extracurricular lessons from the instructor, identified only as a 25-year-old man, at the private academy in Incheon, west of Seoul, and the student's mother, 42, were both confirmed to have contracted COVID-19.

The student and the mother are residents of Nonhyeon-dong of Namdong Ward, it noted. 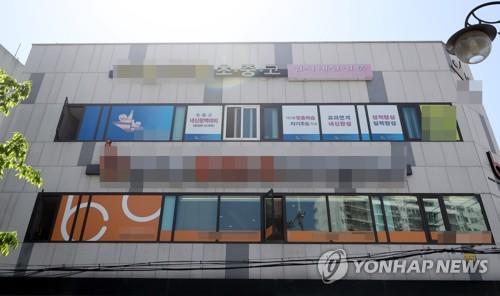 The Incheon government has said it will file a criminal complaint against the instructor for lying about his occupation, though he tested positive for COVID-19 on Saturday after visiting King Club, one of the Itaewon entertainment spots emerging as a hotbed of the coronavirus, on the night of May 2. The man, a university senior, reportedly told Incheon's quarantine officials in an early interview that he had no occupation, though he has been teaching at the Incheon private academy.

Quarantine officials are seeking to prevent further infections among people who have come into contact with the 13 patients related to the academy instructor.

They plan to conduct COVID-19 tests on 40 people who had direct contact and another 378 students, as well as on 1,055 people who went to Sunday services at two churches in Incheon.

Citizens and officials have expressed anger toward the instructor, saying Incheon's cluster infections could have been prevented if the man had revealed his occupation from the beginning.

Cases linked to bars and nightclubs in Itaewon hit 120 as of Wednesday as secondary infections were mounting across the country.