SEOUL, May 14 (Yonhap) -- Jung Joon-young, a disgraced singer and TV personality sentenced to five years in prison for rape and other crimes in a Seoul high court earlier this week, has appealed to the Supreme Court, court officials said Thursday.

According to the officials, Jung's lawyer submitted a petition of appeal to the Seoul High Court on Wednesday.

Jung was convicted of raping women during drinking parties in Hongcheon, Gangwon Province, in January 2016 and in Daegu in March of the same year, together with Choi Jong-hoon, a former member of boy band FT Island, and other members of a mobile chatroom. 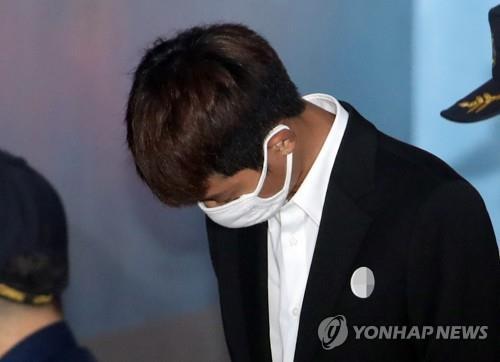 The Seoul High Court also reduced Choi's five-year jail sentence by half in its Tuesday ruling. Jung was given a heavier prison term, as he was additionally indicted on charges that he secretly filmed himself having sex with women and shared the footage with friends on mobile chats.

The high court explained that the scope of commutations differed for the two, as Choi had submitted letters of compensation agreements with his rape victims, while Jung had not.

"Jung said he had made efforts for (compensation) agreements (with his rape victims), but letters of agreements have not been submitted," the court said, adding his detailed statements about the cases and sincere repentance for his acts were considered in reducing his sentence.

It is not known yet whether Choi will appeal to the top court.