SEOUL, May 14 (Yonhap) -- No new cases of the novel coronavirus were reported among military personnel Thursday, but authorities remain on alert as trainees who recently visited entertainment facilities in Seoul's Itaewon district are awaiting test results.

The total number of COVID-19 cases at barracks came to 50 as of Thursday, and 11 of them are tied to clubs and bars in Itaewon that reported a cluster infection in recent days, according to the defense ministry.

South Korea had recorded a marked drop in the number of new patients for weeks until earlier this month, then began to see a surge in confirmed cases last week linked to Itaewon.

The military also had its first patient related to Itaewon on Friday, a staff sergeant of the cyber operations command who visited bars and clubs in the district in breach of the military's restrictions on off-base travel, and then reported virus patients for the following five days.

So far, 98 military members, including 77 trainees who recently joined the military for the mandatory service, reported that they had visited Itaewon nightlife facilities before joining boot camps. Of them, 45 enlistees are awaiting test results, according to the ministry.

Currently, 208 service personnel are in isolation in accordance with health authorities' guidelines. An additional 1,369 members are quarantined as a precaution in line with the military's stricter coronavirus prevention guidance, the ministry said.

"We have been thoroughly implementing safety guidelines to stop the virus from spreading further into the barracks," a ministry official said.

"Anyone caught visiting Itaewon clubs and failing to report to the authorities will face additional punishment," he added.

Excluding the 11 cases, the remaining 39 have fully recovered from the virus, according to the ministry.

On Thursday, South Korea reported 29 new cases of the coronavirus, with 20 related to Itaewon. The nation's total coronavirus cases stood to 10,991, according to the Korea Centers for Disease Control and Prevention (KCDC). 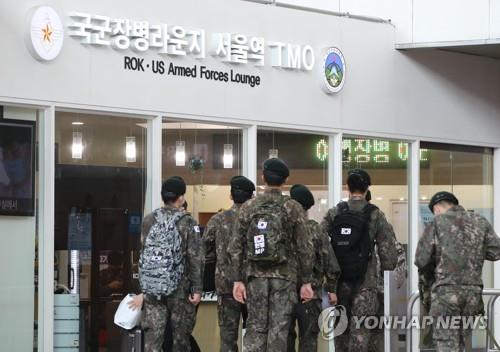