Gas leaked from LG Polymers India last Thursday, killing 12 people and sickening more than a thousand near the plant in the southern Indian state of Andhra Pradesh.

The move is intended to "prevent and eliminate all risks factors," LG Polymers India said in a statement provided by LG Chem. 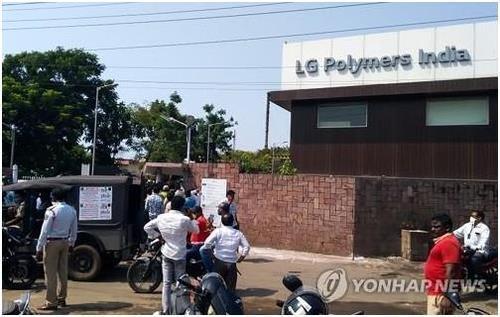 A team of LG Chem's technical experts has arrived at LG Polymers India plant and is working closely with the Indian authorities to analyze the cause of the incident, prevent reoccurrence, and support damage recovery.

On Wednesday, LG Chem said it plans to ship all 13,000 tons of styrene from LG Polymers India to its plant in the South Korean industrial city of Yeosu in line with the Indian government's order.

LG Polymers India said its special task force is supporting the victims and bereaved families and visiting them at hospitals and their homes.

The company said it will continue support activities, such as supplying medical and household goods and the sanitation of homes, and working with government agencies to ensure all possible support for bereaved families and victims.

"We will soon set up specialized institutions to conduct surveys on health and environmental impacts and disclose the results transparently," the company said in the statement. "Our teams will carry out mid-to-long-term Corporate Social Responsibility projects that can contribute to the local community based on suggestions of the residents."