SEOUL, May 15 (Yonhap) -- It was almost exactly a year ago that Preston Tucker made his South Korean baseball debut with the Kia Tigers.

"Last year was the first year that I had played pretty much every day in the field," Tucker told Yonhap News Agency in a phone interview on Wednesday. "Even going into my first game with Kia, I wasn't in the shape I wanted to be in order to play every day. I focused on getting a lot stronger and being able to keep my strength throughout the whole year." 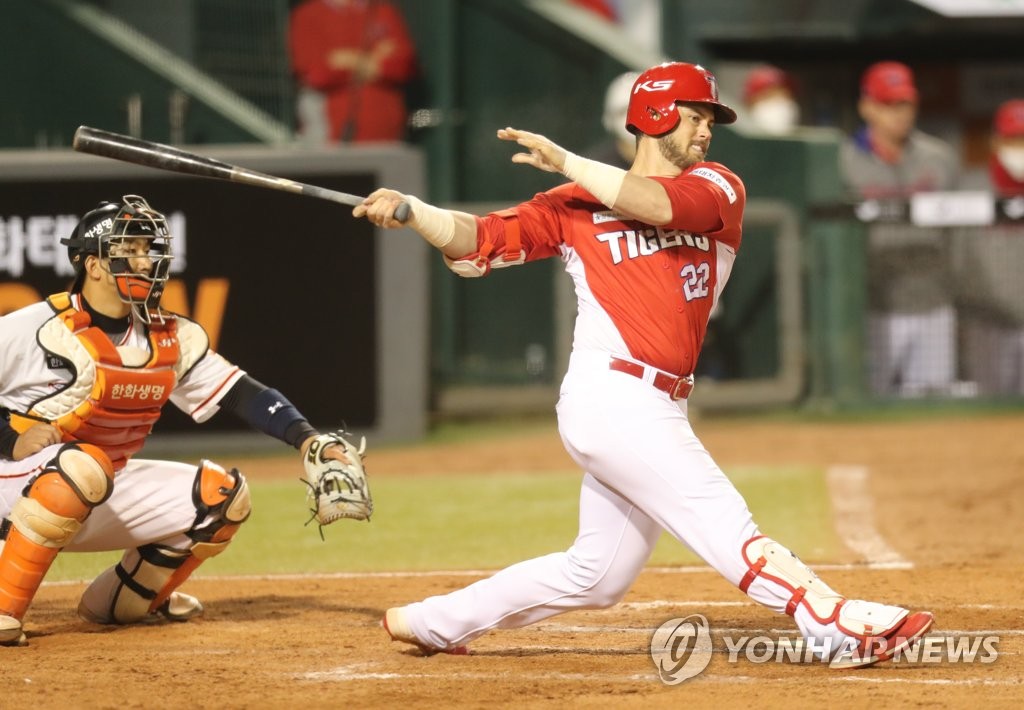 And whatever he did in the offseason to build strength, it's paying early dividends in the 2020 Korea Baseball Organization (KBO) season. In nine games through Thursday, Tucker is batting .406/.500/.750 with three home runs and 11 RBIs. He leads the Tigers in all five of those categories.

"I think I had a pretty good year last year. I wanted to pretty much improve on everything: average, walks, power numbers and defense," Tucker said. "I didn't have a specific number in mind for home runs, RBIs or average. I just wanted to get better than I was last year at everything."

Tucker said he has "a plan" against every pitcher, and as long as he takes a good swing on the pitch he wants, "Good things are going to happen for me."

And good things have happened for him so far this year. Tucker, who bats left-handed, hit his first three home runs against two left-handers -- two homers against Baek Jung-hyun of the Samsung Lions and one against Kim Seong-min of the Kiwoom Heroes -- and all three shots went opposite field.

It isn't just Tucker. At least in the early going this season, balls seem to be flying farther and more frequently than the last, despite the use of the same, de-juiced ball that resulted in underwhelming offensive numbers in 2019. 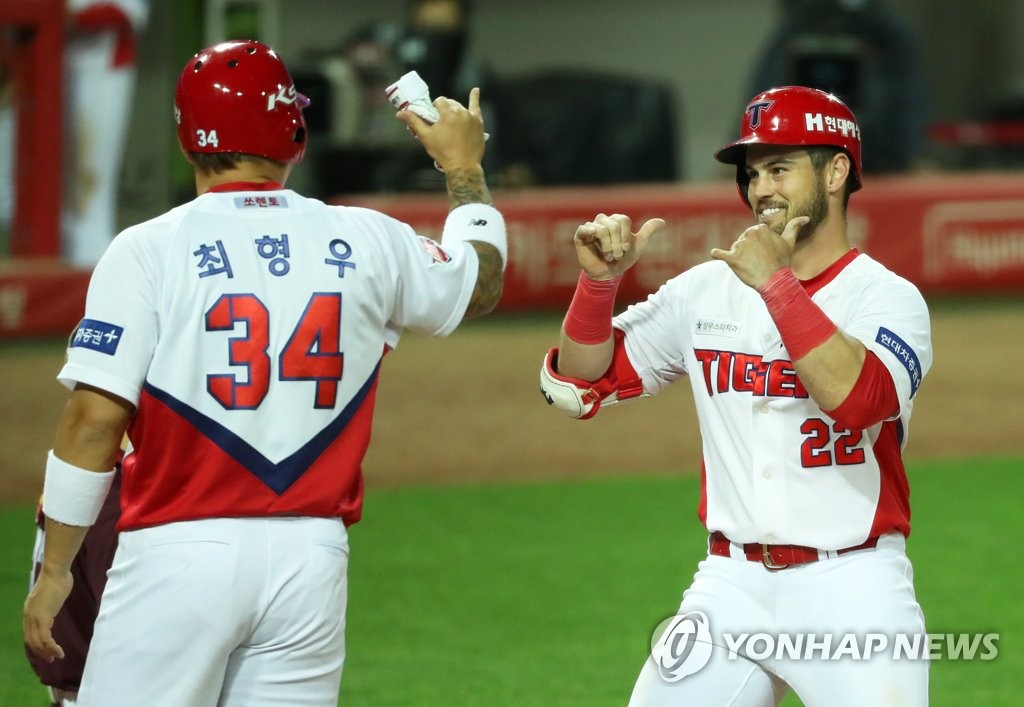 Tucker offered that the warmer weather may be a contributing factor. A typical KBO season starts in late March, but this year, the coronavirus pandemic forced the league to delay the beginning by more than a month to May 5. The warmer it is, the farther the ball carries, Tucker said.

"I did get a little bit stronger, so I think I am hitting the ball a little harder," Tucker added. "I know that they're the same balls but I feel like, leaguewide, everyone is swinging the bat really well."

Tucker said the biggest part of his adjustment to the KBO last year was to handle the pressure immediately put on his shoulders as the go-to bat in the heart of the order. Tucker replaced underperforming Jeremy Hazelbaker, and after batting in the fifth spot in his first three games, Tucker was moved up to the No. 3 spot. He ended up making 347 of his 399 plate appearances there.

"The hardest part is that right from the start, the team relies on you pretty heavily," Tucker said of being the lone import bat. "I think they think you should be having success here and they want to let you figure out on your own. After about a month here, I started to feel pretty good about myself."

Playing for an American manager in Matt Williams has also helped in more ways than just having someone who speaks the same language. Tucker said while Williams scheduled more games than what the Tigers had been used to in spring training, the new skipper also made sure the players wouldn't overexert themselves before the real season began. 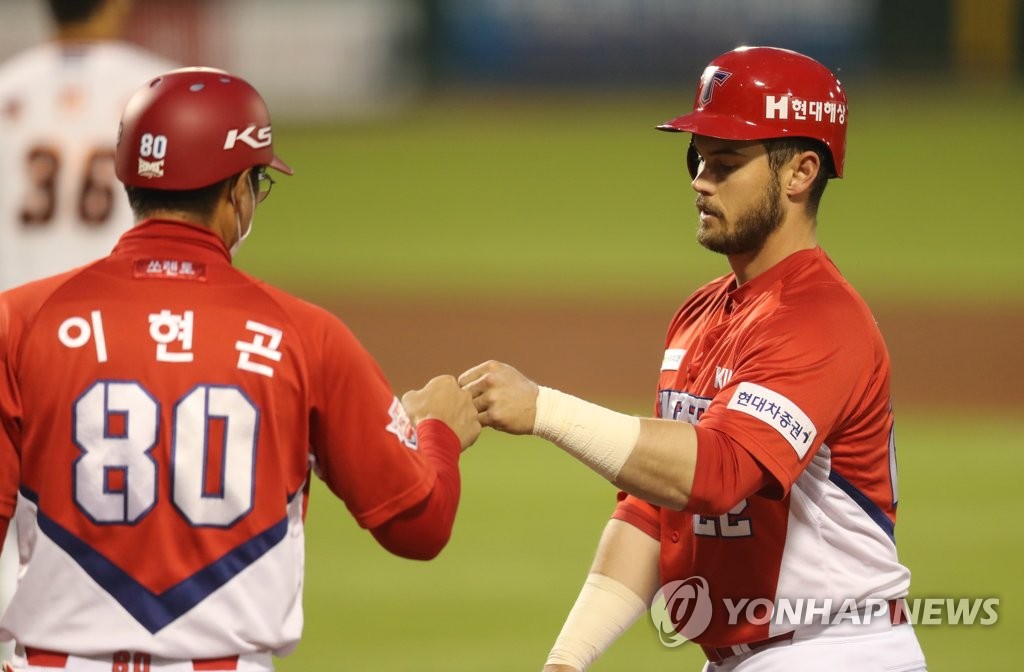 "No one was playing full games. No one was playing every day," Tucker said. "Everyone was pacing themselves and getting ready for Opening Day. The season started late and we'd been playing so much already. If we had not paced ourselves, we'd be tired already."

Tucker, who turns 30 in about two months, said he "would love to have a career" in South Korea. ESPN's broadcast of six KBO games per week may give him and other former major league players here some unexpected exposure, which may pave a path back to the big leagues for them.

While Tucker is open for all new opportunities -- "I think any kind of attention is good attention," he said -- his heart is with the Tigers and their fans.

Tucker, who quickly became a fan favorite, won over even more fans after last season for expressing a strong desire to return. Tucker said the feelings are mutual.

"Fans here are unbelievable. There's nothing but love from the fans here in Korea," he said. "That was a big part of (my decision to re-sign). That influences players' decisions." 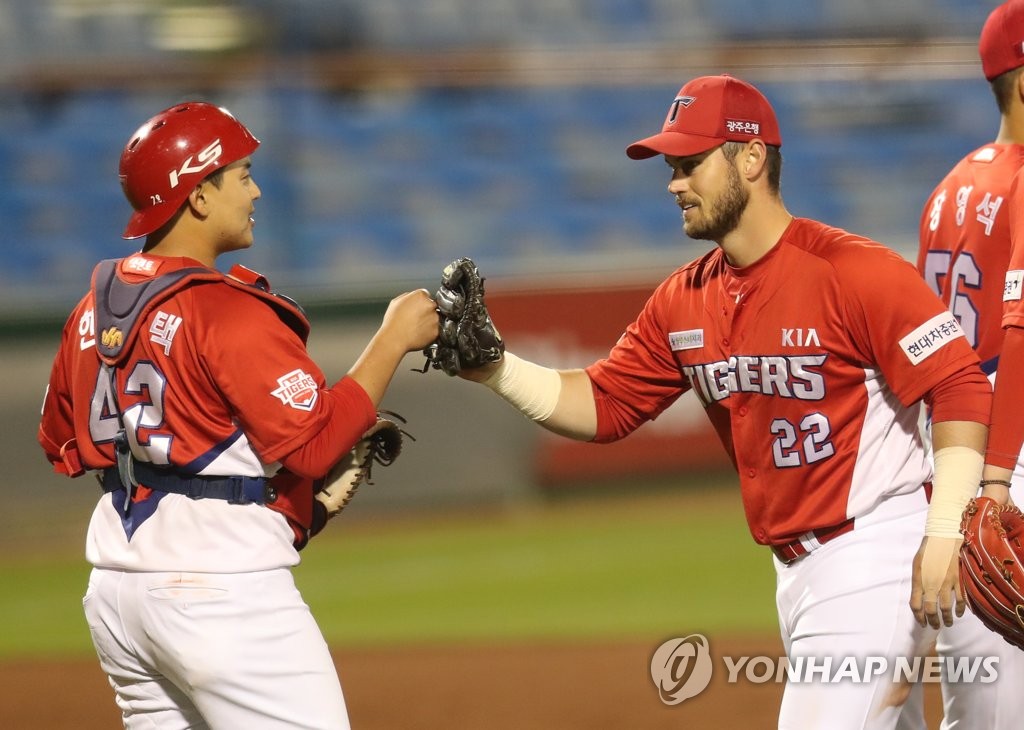