BUSAN, May 16 (Yonhap) -- A funeral director has been detained for stealing at least 10 gold teeth from bodies at a hospital funeral home in Busan, police said Saturday.

The mortician, identified only as a man in his 30s, was detected on surveillance cameras trespassing into the funeral parlor's chapel of rest at 3:30 a.m. Thursday and opening corpse refrigerators. His intrusion and gristly acts in the wee hours of the night were immediately reported by hospital security guards to the police.

On arriving at the funeral home in the port city's Sasang Ward, police officers were surprised to find 10 gold teeth, along with a tweezer and a plier, in his pocket. When asked why he broke into the funeral home, he confessed to having pulled out the gold teeth from three corpses stored in the refrigerator, using the tools prepared in advance, according to the police. 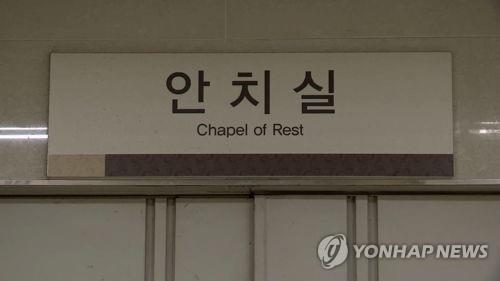 He was accused of collecting only the gold in crowns or fillings from the corpses for sale, instead of pulling out entire teeth. Gold teeth reportedly sell for 20,000 won (US$16.3) to 50,000 won apiece in the market.

The man, who has worked as a freelance funeral instructor over the past six years, told police that he had committed the theft to make up for his poor income. He said he had thought of profiting from the corpses because their gold teeth would be abandoned anyway.

Police said the man had never worked at the funeral parlor into which he trespassed.

Police have requested a pretrial detention warrant for him on charges of trespassing and dismemberment of corpses, while inquiring into the possibility of his other crimes in the past.