SEOUL, May 15 (Yonhap) -- All small firearms at South Korea's border guard posts have been newly inspected, but no problems have been found, an official said Friday, following revelations that the response to the North's recent gunfire was slow due to a machine gun malfunction.

The Joint Chiefs of Staff official made the remark during a press briefing, promising to beef up regular inspections of weapons to prevent a similar incident from happening again and maintain a full readiness posture.

The military has come under fire following revelations that it took more than 30 minutes to fire back after at least four bullets from the North hit one of the South's guard posts inside the Demilitarized Zone (DMZ) on May 3.

Officials blamed the slow response on a malfunction in a KR-6 machine gun.

After hearing gunshots and finding bullet marks on the wall of their post, soldiers on duty attempted to fire the gun with a remote control system, but it malfunctioned due to the faulty firing pin, officials earlier said.

After the botched attempt with the KR-6 gun, the South Korean troops turned to K-3 and K-6 machine guns and fired around 30 rounds at the North Korean guard post. It took 32 minutes for the South to fire after soldiers on duty heard the North's gunshots and 22 minutes after they found bullet marks on the wall of their post, according to the JCS.

"In the wake of the incident, we checked all the small arms deployed at guard posts along the DMZ and found no problems," the official said.

A firing pin is supposed to be inspected on a monthly basis by a mobile maintenance team, and the military last did that in January, according to the officer.

"In February, the team failed to gain access to the DMZ due to heavy snow and then this type of maintenance had been halted until last week due to the coronavirus," he said, adding the military has checked their weapons on a daily basis, but it is hard to find if a firing pin works properly through the process.

"We will carry out our daily and weekly inspections more thoroughly, and will take preventive measures for a full readiness posture."

South Korea called on North Korea to explain the incident, but the North has not responded, the defense ministry said Friday.

The U.S.-led United Nations Command, which administers the buffer zone and enforces the Armistice Agreement, said investigation into the case is still ongoing to determine if any violation of the pact that halted the 1950-53 Korean War took place during the gunfire.

The DMZ, which is about 250 kilometers long and 4 km wide, is one of the world's most heavily fortified borders and has often been a flashpoint between the rival Koreas. 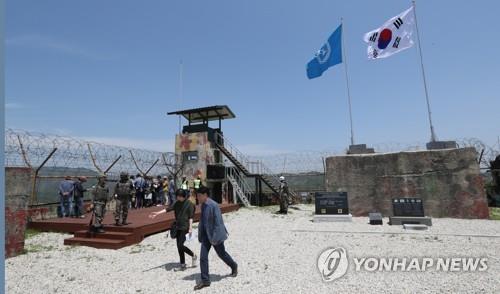