SEOUL, May 15 (Yonhap) -- The government will fast-track infrastructure projects to help cushion the steel industry from the fallout of the crippling coronavirus outbreak, the industry minister said Friday.

"The implementation of state infrastructure projects will be advanced as much as possible to help the industry weather a tumble in global demand," Industry Minister Sung Yun-mo said in a meeting with CEOs of steel companies.

"The government will step up efforts to help steelmakers tide over possible liquidity crunches due to tumbling demand and will also actively cope with growing protectionism in overseas markets," Sung said.

The government will also spend more than 400 billion won (US$325 million) on the metal sector's research and development in a bid to help nurture their competitive edge, he added. 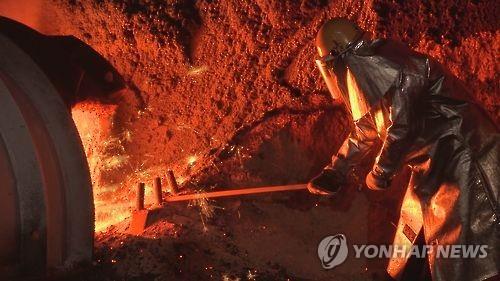 The steel industry, one of South Korea's key industrial sectors, has been hit hard by the pandemic that has sent domestic and overseas demand for steel products tumbling.

Steel exports plunged 24.1 percent on-year in April, with overseas shipments projected to shrink more than 20 percent in May and June.

This year, domestic demand has gone south from a year ago, marking the fourth consecutive year of on-year decline. Steelmakers' domestic sales are forecast to drop below the 50 million ton mark for the first time since 2009.

Ahead of the gathering, Choi told reporters that the domestic steel industry will likely bottom out after the third quarter of this year.
(END)