SEOUL, May 15 (Yonhap) -- South Korea's oldest coronavirus patient, a 104-year-old woman in the southeastern province of North Gyeongsang, was released from a hospital Friday after 67 days of treatment, officials said.

The centenarian, identified only as Choi, left Pohang Medical Center, a provincial government-run hospital, in Pohang, some 375 kilometers southeast of Seoul, around noon after testing negative for COVID-19, according to the hospital officials.

Choi, who had stayed at a senior care center in Gyeongsan, just south of Daegu, since 2012, tested positive for the virus on March 8 amid a cluster of infections at the center, and she was admitted to the Pohang hospital two days later. 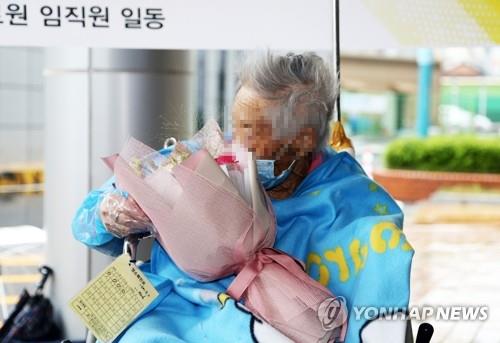 She initially showed symptoms, such as a cough and sore throat, and then fell into a dangerous condition in April after developing enteritis, which resulted in decreased consciousness and blood pressure and increased white blood cells and inflammation levels, the officials said.

But her condition improved, as the medical staff responded appropriately. They took turns 24 hours a day staying by her side because she has existing diseases and could not walk alone.

Choi has taken a total of 12 coronavirus tests since March 26. The ninth test yielded her first negative result, but she again tested positive in the 10th test. She then tested negative Wednesday and Thursday.

Under a quarantine guideline that permits discharge from hospital after two consecutive negative results and upon her own request, Choi was allowed to leave the hospital.

She briefly waved to well-wishers and reporters while leaving the hospital in a wheelchair but did not make any remarks.

Hospital workers gave her a bunch of flowers, saying congratulations on her discharge and wishing her good health. They said Choi had frequently expressed gratitude to the medical staff from her sick bed. She returned to the Gyeongsan senior care center by ambulance.