SEOUL, May 18 (Yonhap) -- South Korea will provide 10,000 masks and other health protective items to Native Americans who fought in the 1950-53 Korean War to help them combat the new coronavirus, the veterans affairs ministry said Monday.

The 70th Anniversary of the Korean War Commemoration Committee will deliver the masks and hand sanitizers to the Navajo veterans in an expression of appreciation for their contribution during the war, according to the Ministry of Patriots and Veterans Affairs.

The items were originally planned to be handed over later in the day, but the delivery has been postponed due to the shutdown of a local administrative office in the U.S. amid the COVID-19 situation. Officials are working to deliver the items around Wednesday local time.

Among some 800 Navajo men who fought in the three-year conflict, around 130 veterans are alive, it said.

"The government remembers those who made noble sacrifices to defend a strange country 70 years ago, and we hope they will proudly tell their posterity about the choice they made so many years ago," committee co-chairman Kim Eun-gi said. 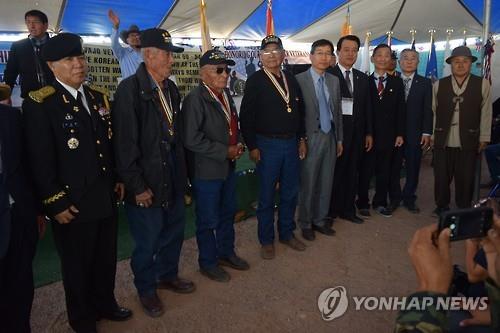