SEOUL, May 18 (Yonhap) -- South Korea was to send rotational peacekeeping troops to South Sudan on a chartered flight Monday, after months of delay due to the coronavirus, the defense ministry said.

On its way back, the flight will make a stopover in Ethiopia to bring home South Korean citizens stranded on the African continent amid the COVID-19 pandemic, according to the ministry.

The 12th batch for the 300-strong Hanbit Unit was supposed to be in the war-torn nation in March on peacekeeping missions, but their dispatch has been delayed as South Sudan asked Seoul and other foreign nations not to send fresh troops due to the coronavirus.

In late March, most members of the existing contingent returned home without replacement, with only dozens of troops staying there to perform basic surveillance duties until a fresh contingent arrives.

The deployment of the rotational troops came after South Sudan allowed their arrival in an exception to entry restrictions.

"As the government successfully wrapped up discussions with the government of South Sudan and the U.N., the Hanbit Unit could become the only exception to South Sudan's entry ban among international troops stationed there and be able to rotate," the defense ministry said in a release.

The Asiana Airline flight that is to transport the troops will take off later in the day, it added.

On its way back home, the flight will stop in Addis Ababa, Ethiopia, where around 200 South Korean citizens residing in African nations, such as Ghana and Kenya, are planning to board the flight home, according to the ministry. 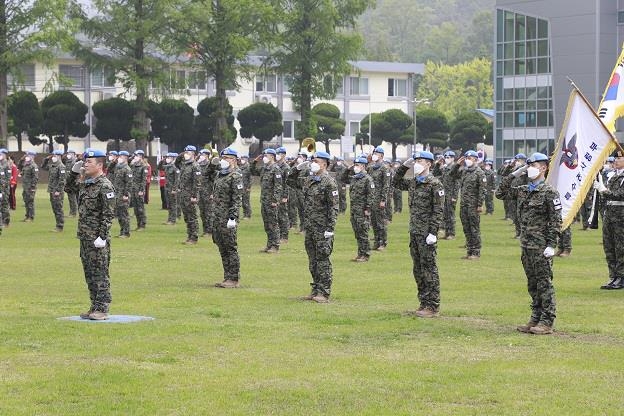 Following Monday's departure of the first echelon, the remaining troops will head to South Sudan on June 1, according to the ministry.

The remaining troops of the 11th batch will return home in June after all the new members arrive there and complete transfer duties, it added.