SEOUL, May 18 (Yonhap) -- The longest three minutes of outfielder Byeon Sang-kwon's career came Sunday, in the seventh inning of his first Korea Baseball Organization (KBO) game for the Kiwoom Heroes.

Pinch hitting for center fielder Park Jun-tae in the No. 9 spot, Byeon drove a 1-0 pitch from Choi Dong-hwan down the right field line. 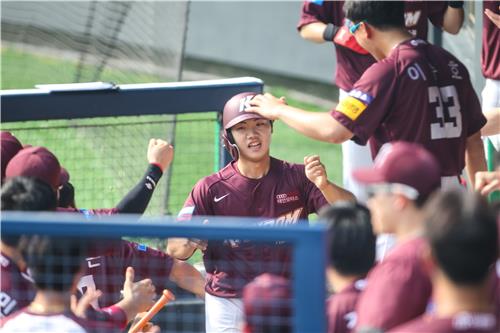 It was initially ruled a foul, but the Heroes challenged the call. After three minutes of video review, the call was overturned. Byeon was awarded his first KBO hit, a double. Byeon then scored his first career run on a single by the next hitter, Seo Geon-chang.

It was all part of a whirlwind day for the undrafted, 23-year-old rookie.

"Since this was my first day up here, everything was just amazing," Byeon said after the Heroes' 9-4 victory at Jamsil Stadium in Seoul, while holding the ball that fell for the seventh inning double. "While the umpires were reviewing the play in my first at-bat, I was just praying for it to be ruled a hit. I felt so relieved when I got that hit." 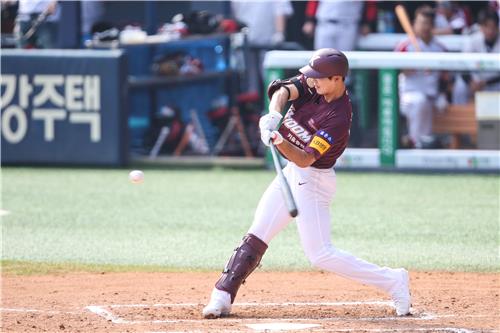 After tearing it up in the Futures League, which is the KBO's minor league, Byeon got called up before Sunday's game. Their regular center fielder, Lim Byeong-wuk, was ruled out for six to eight weeks with a hamstring injury sustained on Saturday, and the Heroes needed an extra outfielder.

After eight games in the Futures league, Byeon was hitting .412/.474/.471 with 10 RBIs. His defense may still need some work -- he misjudged the flight of a flyball by Jung Ju-hyeon in the bottom eighth and let it sail over his head for a double -- but there seems to be little question about his bat-to-ball skill.

Before his callup, Byeon had strung together three straight two-hit games, and also enjoyed a 4-for-5 game on May 7.

Manager Son Hyuk has been applying a revolving door policy in left field this season. With Lim's extended absence, Son will move right fielder Lee Jung-hoo to center field and will likely go through multiple players in right field for the foreseeable future.

It bodes well for Byeon's chances of sticking around in the KBO.

"I'll make sure I don't miss any opportunity that comes my way, whenever I get into a game," Byeon said. "I'd like to stay here a long time." 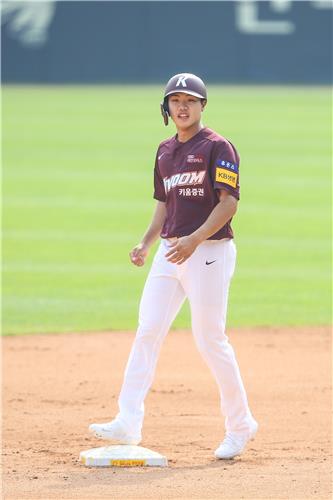