SEOUL, May 18 (Yonhap) -- SBS' fantasy romance "The King: Eternal Monarch" was one of the most anticipated TV series for the first half of 2020 in South Korea, for the reunion of star screenwriter Kim Eun-sook and actor Lee Min-ho.

Lee chose the show as his post-military comeback project after "The Heirs" (2013).

But the big-budget series, which was also financed by U.S. streaming giant Netflix, saw its viewership ratings drop to a record low of 6.3 percent on its ninth episode that aired on Saturday. Its 10th episode inched up to 7.8 percent next day.

The show's ratings have been on a constant decline since its first and second episodes on April 17-18 marked 11.4 percent and 11.6 percent, respectively.

Starring Lee and Kim Go-eun, "The King" is a story about two parallel universes, one in a fictional constitutional monarchy, the Korean Empire, and the other in a country similar to present-day South Korea, the Republic of Korea.

The military romance drama "Descendants of the Sun" reached 38.8 percent on KBS, while tvN's fantasy "Guardian" rose to 20.5 percent to set the record for highest viewership for paid channels in the country at that time. The period drama "Mr. Sunshine" posted 18.1 percent.

Most of her previous pieces have gained massive popularity in South Korea and elsewhere in Asia for her attractive characters, catchy lines and witty banter, helping Kim carve out her extraordinarily successful career on the Korean small screen scene.

Some tricky dialogue, jokes and costumes from the series have become the talk of the town, while lead actors like Song Joong-ki and Gong Yoo rose to stardom across Asia. 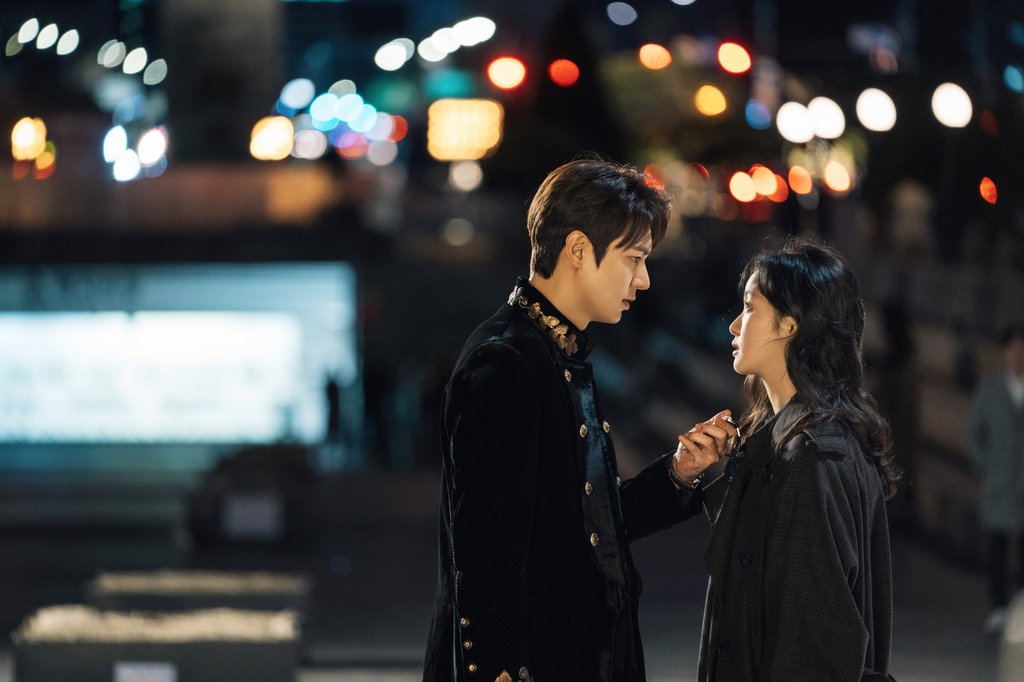 In "The King," however, such characteristics have failed to impress audiences. Rather, controversies over its historic scenes have undermined the reputation of the drama.

Experts point out that the series fails to fully explain the parallel universe to the audience, who also complain of the similarity of the two different worlds -- the Korean Empire and the Republic of Korea.

"It's a romance drama, but the love between the two lead roles isn't at the forefront," cultural critic Ha Jae-geun said. "The story unfolds at a relatively slow pace and the parallel world is too complex to understand."

At the same time, some people claim that they are distracted by excessive advertising through product placement in the drama as brand names or corporate logos are displayed too often and protagonists use the advertised products too frequently.

Also, the drama has been under fire for its Japan-like styles in some scenes. People noted that turrets of wooden palace buildings of the Korean Empire have some Japanese characteristics, and a Japanese vessel looked similar to a Korean warship in a maritime battle between the Korean Empire and Japan.

The producers of the show apologized for the controversy and promised to correct the scenes.

"It's hard to find some clever, creative conversations and catchy soundtracks in 'The King,' that the writer has presented so far," Ha, the cultural critic, said. "I think the show needs to focus more on romance and speed up the pace to attract more viewers in the remaining episodes."

Keywords
#The King: Eternal Monarch #Kim Eun-sook
Issue Keywords
Most Liked
Most Saved
Most Viewed All Categories
Most Viewed More
Most Viewed Photos