SEOUL, May 18 (Yonhap) -- South Korea has decided to postpone a major maritime firing exercise, initially scheduled for this week, due to adverse weather conditions, the defense ministry said Monday, rejecting allegations the decision was aimed at avoiding angering North Korea.

The Army, the Air Force and the Navy had planned to carry out their biannual live-fire drill off the southeastern coast of Uljin on Tuesday, involving major assets, such as ballistic missiles, combat ships and fighter jets.

But the military decided to put off the maneuvers, sparking speculation officials were overly concerned about possible protests from North Korea, as the decision came after the North's military reacted angrily to a Navy-Air Force joint drill in the Yellow Sea earlier this month.

"We carry out diverse drills throughout the year to beef up the jointness of our military. But this time, we decided to postpone the planned drill due to weather conditions," ministry spokesperson Choi Hyun-soo told a regular briefing Monday.

The official expressed regret over media reports the decision has to do with the North.

"Several media outlets reported as if other factors affected our decision, which distorts our normal decision-making procedures," Choi said, calling on the press not to stoke "unnecessary security fears" and to stop hurting public confidence in the military.

Following the joint exercise earlier this month, the North's Ministry of the People's Armed Forces issued a statement, claiming it is "a grave provocation which can never be overlooked and this situation demands a necessary reaction from us."

Following the criticism, local daily Chosun Ilbo reported that the presidential office Cheong Wa Dae reprimanded military officials over the revelation of the exercise, a claim immediately denied by the authorities. 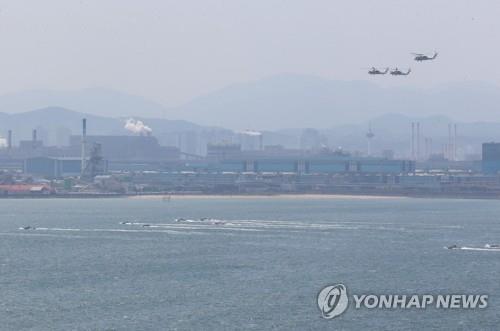