SEOUL, May 18 (Yonhap) -- North Korea has denied allegations that it is forcibly holding South Koreans in the country after abducting them in a 1969 plane hijacking, in a letter released Monday by the United Nations human rights agency.

In 1969, North Korea hijacked a Korean Air plane carrying 50 people and redirected it to the communist nation. Of them, 39 were sent back to the South two months later, but the other 11 are believed to still be in the North.

The North rejected the allegations of abductions, claiming the pilots voluntarily defected.

The letter from North Korea, dated February 24, came in response to a letter that the Office of the U.N.'s High Commissioner for Human Rights (OHCHR) sent to the North in early February urging North Korea to repatriate the abducted South Koreans.

The North rejected the allegation in the letter, calling it an "extension of the stereotyped despicable political plots fabricated by the hostile forces aimed at overthrowing the DPRK system using human rights as a pretext" and "no worthy for consideration." DPRK is the acronym for the North's official name, the Democratic People's Republic of Korea.

The North said the agency should pay attention to the whereabouts of its citizens that it claimed the South has abducted, including 12 restaurant workers in China who arrived in South Korea in 2016. The South says the restaurant workers voluntarily defected. 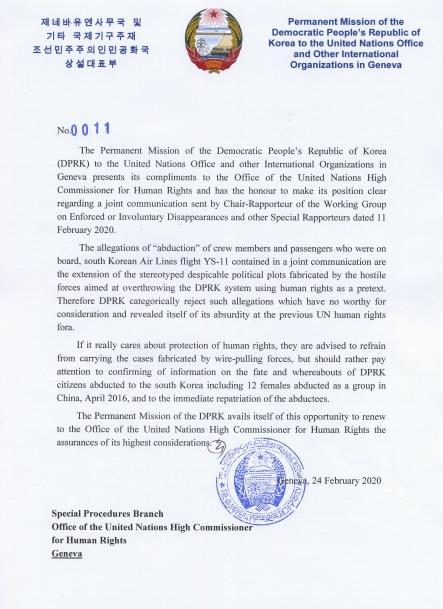