SEOUL, May 18 (Yonhap) -- South Korea's leading car-sharing app operator SoCar has teamed up with a local vehicle tech startup to launch an autonomous car shuttle service on the resort island of Jeju, the company said Monday.

The collaboration with RideFlux Inc., which officially began earlier in the day, marks the first time that a so-called demand responsive transport service is being offered in the country.

"Past operations were carried out under 'test conditions' with restrictions placed on traffic," SoCar claimed. It said the latest trial service, on the other hand, will be operated under normal road conditions with traffic congestion and in a natural environment.

It pointed out that the 5-kilometer-long two-way shuttle service between Jeju International Airport and SoCar's local station, where people can pick up cars, will transport ordinary people.

The company said that while the vehicles to be used can mostly drive by themselves, it plans to have specially trained employees in the driver's seats as an extra layer of safety. It said two customers will be allowed per car. 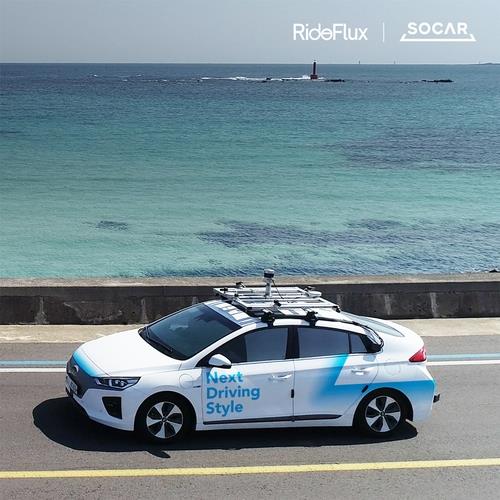