SEJONG, May 19 (Yonhap) -- South Korea's finance ministry said Tuesday it will ease regulations on alcoholic drinks, in a bid for local producers to increase their competitiveness against foreign firms.

Under the deregulatory move, which is subject to approval from the National Assembly, local firms will be allowed to produce alcoholic drinks under an original equipment manufacturer contract, the Ministry of Economy and Finance said in a statement.

Producers and retailers will be allowed to sell alcoholic drinks via delivery services, the ministry said.

Currently, producers of alcoholic drinks are required to notify the government of their price changes. That requirement will be abolished for producers of beer and "makgeolli," a Korean rice brew, the ministry said.

If producers of traditional alcoholic drinks sell their products to foreign tourists, taxes on the products will be exempted, the ministry said. 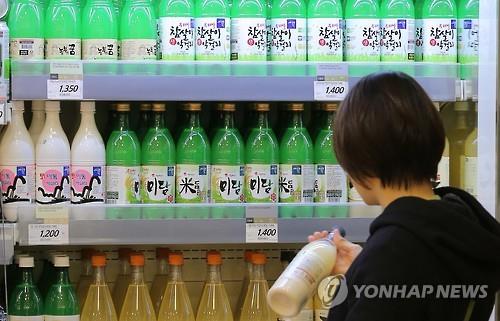 The imbalances have led to imported beers accounting for a larger share of the South Korean market in recent years. Imported beers are estimated to have accounted for 20.2 percent of the local beer market in 2018, up from 8.5 percent in 2015.

From January this year, South Korea changed the tax system on beer for the first time since 1968 to address imbalances in taxes between imported and domestic beer.

The change called for a tax system based on value rather than an ad valorem, a charge levied on prices of beer, according to the ministry.

Under the change, South Korea has uniformly levied 830.3 won in tax per liter of either local or imported beer while collecting liquor tax of 41.7 won per liter of makgeolli.

Delivery services of alcoholic drinks, OEM production to be available in S. Korea

Delivery services of alcoholic drinks, OEM production to be available in S. Korea