INCHEON, May 19 (Yonhap) -- The number of confirmed coronavirus cases in Incheon traced to an infected private academy instructor at the center of the port city's latest outbreak of cluster infections have increased by four to 21, the municipal government said Tuesday.

The latest victims include a Chinese couple who used a taxi driven by a 66-year-old man who contracted COVID-19 after driving the instructor in Incheon, about 50 kilometers west of Seoul, on May 4, the government said.

The Chinese couple, aged 53 and 48, who reside in the city's Yeonsu Ward, took the infected driver's taxi last Saturday, it said. 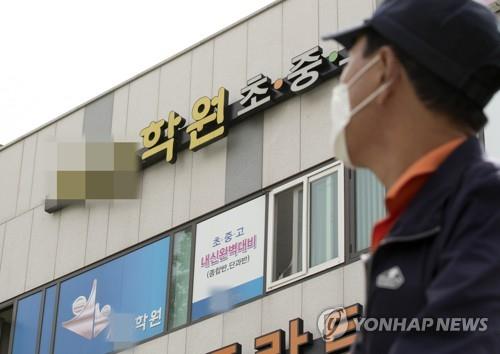 Separately, a 17-year-old student, who visited a coin karaoke room in Michuhol Ward on May 6, and his 36-year-old mother have tested positive, the government said, noting the instructor and two of his infected academy students also visited the same karaoke room on the same day.

The latest infections have been confirmed as quarantine authorities have been conducting coronavirus tests on all 143 passengers who made credit card payments after taking the infected driver's taxi from May 4 to last Saturday, as well as on all citizens who visited the Michuhol karaoke room on May 6.

The driver, who had sat behind the wheel before developing symptoms of cough and sore throat last Saturday, and his 67-year-old wife tested positive on Sunday and Monday, respectively.

The headcount is likely to increase by one, as a four-year-old grandson of the taxi driver, who lives in Yongin, just south of Seoul, has been found to be infected, according to Yongin officials. The boy had reportedly stayed at his grandparent's home in Incheon's Namdong Ward from May 9-17.

The controversial instructor, a 25-year-old university senior, tested positive for the virus on May 9 after visiting King Club, one of Itaewon's nightspots at the center of the recent resurgence of virus infections, on May 2, but he lied about his teaching job at an Incheon private academy, hampering quarantine efforts by the local government. He is now under police investigation after the government filed a criminal complaint.

So far, a total of 21 confirmed cases, including 11 students, have been traced to the instructor.

The instructor was found to have taken taxis 13 times from May 2-8, prompting authorities to conduct virus tests on all 13 drivers. Except for the 66-year-old driver, the 12 others have tested negative.

Quarantine officials are particularly embarrassed as the instructor had probably infected the taxi driver even though both of them wore face masks during the ride.