SEOUL, May 19 (Yonhap) -- Individual investors are flocking to direct stock investment, choosing to bet on their own picks over brokerage houses' funds, data showed Tuesday.

Outstanding margin loans came to 9.95 trillion won (US$8.14 billion) as of Friday, up 10.1 percent from a month ago, according to the data from the Korea Financial Investment Association (KOFIA).

Margin loans refer to those that retail investors take out from brokerage houses to invest in stocks. A rise in outstanding margin loans usually points to growing investor expectations for rising stock prices.

In stark contrast, individuals' investments in securities-type funds declined with a net outflow of 6.5 trillion won in the January-April period, KOFIA data showed. 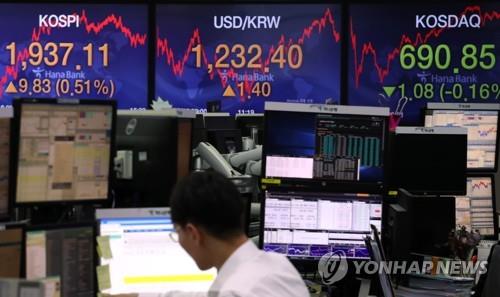 After peaking at a record high of 10.5 trillion won on Feb. 24, the margin loan balance bottomed out at 6.4 trillion on March 25 in the wake of massive cluster infections in South Korea.

The balance has since increased for the 33th session till Monday, approaching the 10 trillion-won level again.

"Due to the prolonged low-interest, low-yield tide, more individual investors (in South Korea) are likely to crave for direct stock investment, particularly for the heavyweights and bellwethers," he added.