SEOUL, May 19 (Yonhap) -- U.S. Forces Korea personnel will not be allowed to visit adult-only establishments, such as bars and clubs, for the foreseeable future, USFK Commander Gen. Robert Abrams said Tuesday, calling for vigilance over the coronavirus.

Starting 6 a.m. Wednesday, USFK members will be allowed to visit eat-in restaurants, go shopping and do other off-base activities, as the military decided to lower its Health Protection Condition (HPCON) level by one notch to the second-lowest "Bravo" from "Charlie."

But Seoul and nearby regions remain in HPCON C, and all bars, clubs and establishments that restrict entry to adults only are still off limits across the country until further notice "due to the associated risk," according to USFK.

"No bars or clubs for the foreseeable future. Eat-in restaurants okay. Rule of thumb: if the property does not allow minors in, then it is off limit," Abrams said on his Twitter account. "We need to ease into this with an abundance of caution."

The easing of restrictions comes as South Korea has seen a slowdown in the number of new coronavirus cases, though the authorities remain on the alert regarding a cluster infection related to nightlife establishments in Seoul's multicultural district of Itaewon.

So far, USFK has reported 28 cases of the new coronavirus among its population, including four active-duty service members.

On Tuesday, South Korea reported 13 additional virus patients, raising the nation's total to 11,078, according to the Korea Centers for Disease Control and Prevention (KCDC). It marks the fourth straight day that new infections have stayed below 20. 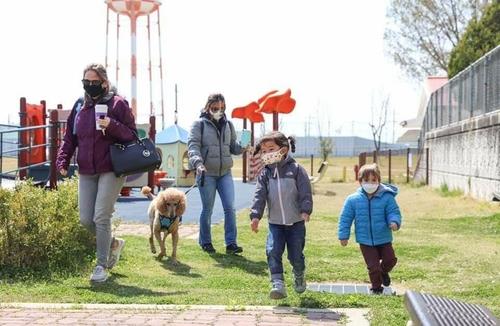