SEOUL, May 19 (Yonhap) -- The South Korean Buddhist community on Tuesday canceled the Lotus Lantern Festival slated for next week due to growing concerns over the recent resurgence of the novel coronavirus infections in the country.

"No one can predict whether new cluster infections will happen again, regarding the recent nightclub-linked cases," the Association of Korea Buddhist Orders, whose members include the country's biggest Jogye Order, said in a press conference in Seoul. "We made the decision after careful consideration and hope that all people will go back to a peaceful life when the pandemic comes to an end as soon as possible."

It said the Lotus Lantern Festival, or "Yeon Deung Hoe" in Korean, including the famous lantern parade in downtown Seoul slated for Saturday and other festive events over the weekend, will be canceled as precautionary measures.

The festival is usually attended by 20,000 people, including Buddhists and tourists.

But religious events celebrating Buddha's Birthday will take place on May 30 as scheduled, under the strict quarantine guidelines, it added.

It is the first time in modern Korean history that the Buddhist circle scrapped its annual lantern festival on its own initiative.

Since 1961, the festival has been called off three times, including once in 1961 when martial law was proclaimed in Seoul due to the April 19 Revolution. It was last canceled in 1980 amid a democratic movement, dubbed "Seoul Spring," in the capital.

Tuesday's cancellation came as South Korea has been struggling to handle a spike in daily new COVID-19 cases related to clubbers from Itaewon, a multicultural and nightlife district in central Seoul.

At least 170 people, including Itaewon visitors, their family members and colleagues, have tested positive for the virus, with the area becoming one of the biggest cluster of infections in the capital city with a population of 10 million.

The Buddhist community had postponed events for Buddha's Birthday, which fell on April 30 this year, and the Lotus Lantern Festival by one month amid the monthslong coronavirus pandemic. 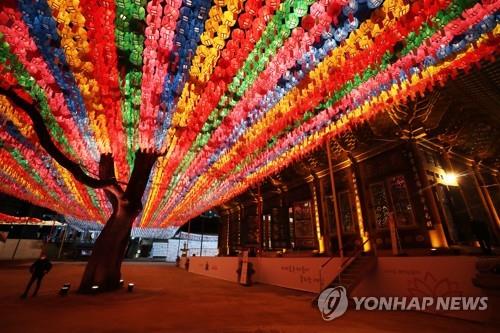