SEOUL, May 19 (Yonhap) -- When COVID-19 infections unexpectedly broke out at nightspots in the hip neighborhood of Itaewon, authorities were caught off guard by entry logs filled with false information.

Thousands of people who were not accounted for apparently left inaccurate phone numbers, prompting authorities to instead scour mobile access records and credit card transactions to track people who were in the area.

Facilities -- such as gyms, "pc bangs" and "noraebangs" -- currently require visitors to write down their names and contact information, and check whether they have a fever or respiratory symptoms or have traveled abroad in the past two weeks.

But after the Itaewon case highlighted lapses in the traditional system that relies on pen, paper and integrity, some local governments are eyeing smarter ways to keep people safe from the infectious virus.

Seongdong Ward, in eastern Seoul, is one of them.

The ward office has been experimenting with mobile entry logs, which it says could make the process more convenient for health authorities, business owners and customers. 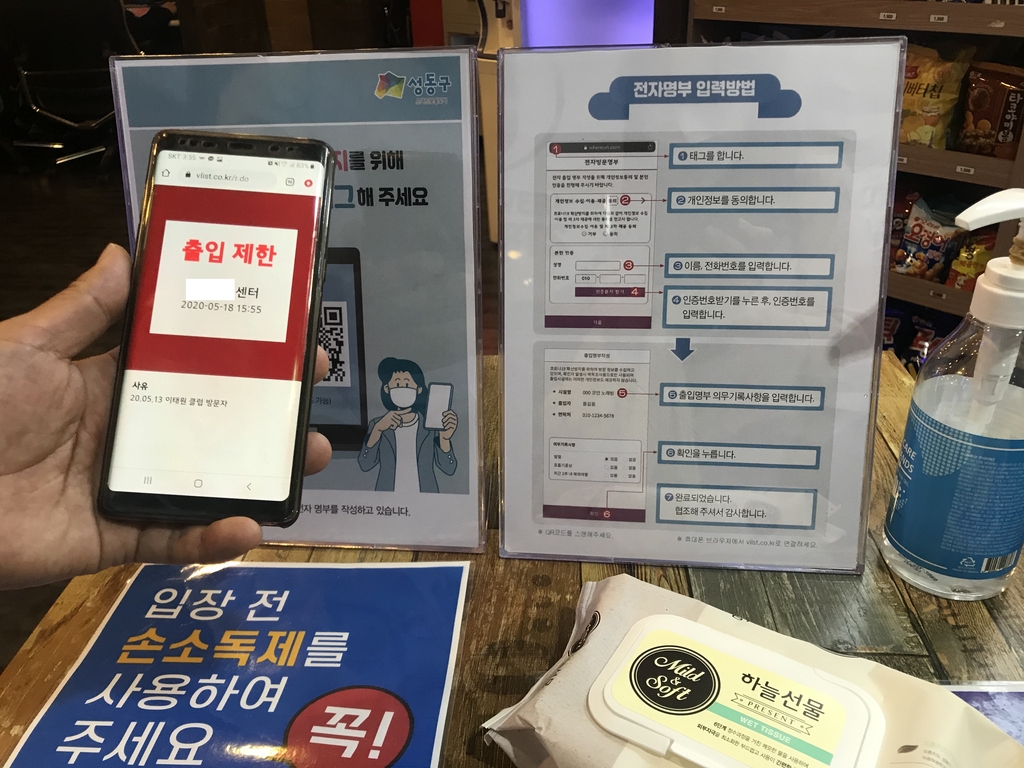 The process is quick and simple.

Visitors can tag or scan their mobile phones on a paper board, which will open a link asking them to agree to personal data use and to fill out their names and phone numbers.

A four-digit code will then be sent for the person to authenticate, and a screen that asks them to check whether they have a fever or respiratory symptoms or a travel record will pop up.

If they have no record of being infected or having visited an affected venue in the past two weeks, a blue screen appears, giving the green light to enter the venue. Those banned from going in will see a red screen showing the reason why they have been denied entry. 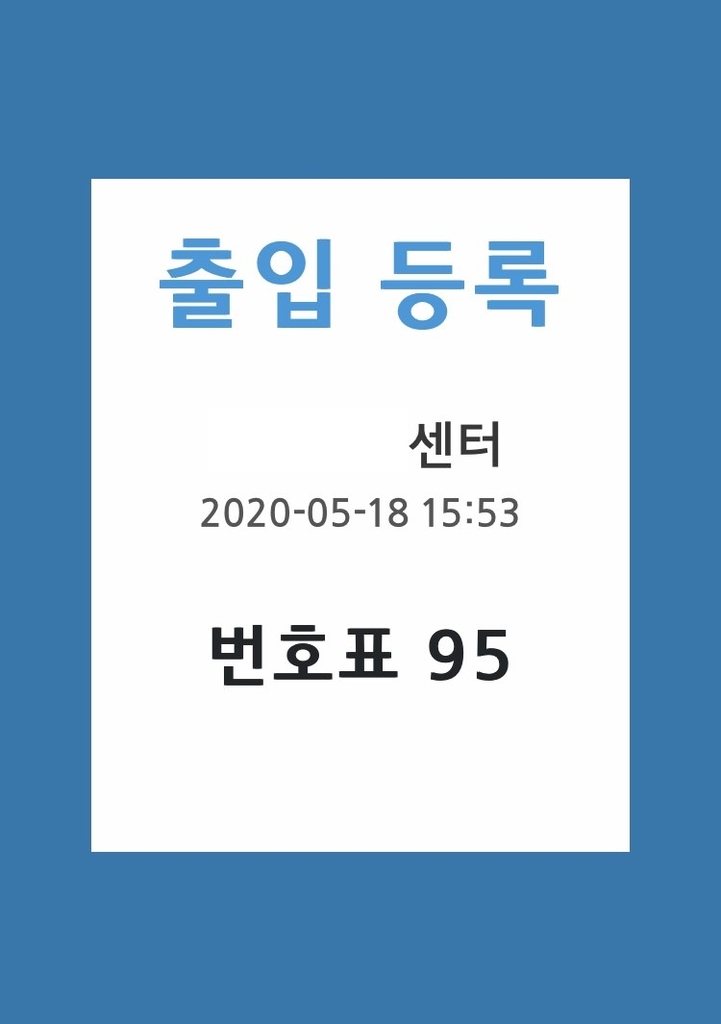 A demonstration by Yonhap News Agency at a "pc bang," or internet cafe, in the university district of Wangsimni took less than a minute.

Authorities anticipate that the mobile system will help prevent possible patients from entering venues, as well as secure a list of people who were at affected venues.

"It's really quite convenient and effective. Once you enter the information, you don't have to repeat the authentication process in other venues that run on the same system," said Lee Sun-ha, a public relations manager at the ward office.

"It's also safer in terms of hygiene and personal data. People don't have to use the same pen and paper, and their information isn't disclosed to other people using the same entry log," Lee added.

Lee said the ward office, which is currently testing the system at four "PC bangs" and two "noraebangs," plan to expand it to other facilities that people visit. Concert halls, gyms and even churches could use it, he said.

Businesses and young customers, who are used to digital technology, appeared mostly positive toward the system.

"On top of my regular tasks, I have to spend extra time explaining to customers how to use the new system," said an employee at the Wangsimni internet cafe, "But it's also convenient since I don't have to repeat the process for regular visitors."

Visitors at the PC bang, mostly men in their teens and 20s, deftly tagged their mobile phones and got seated without asking for assistance.

Regarding privacy and security issues that may surface, Lee said the encrypted personal data is deleted after two months according to the relevant law, with the ward office trying to make the duration shorter considering the cycle of virus transmissions.

Gangwon Province in the country's northeastern region is also pushing to introduce Clean Gangwon Passport, a similar system that runs on QR codes. 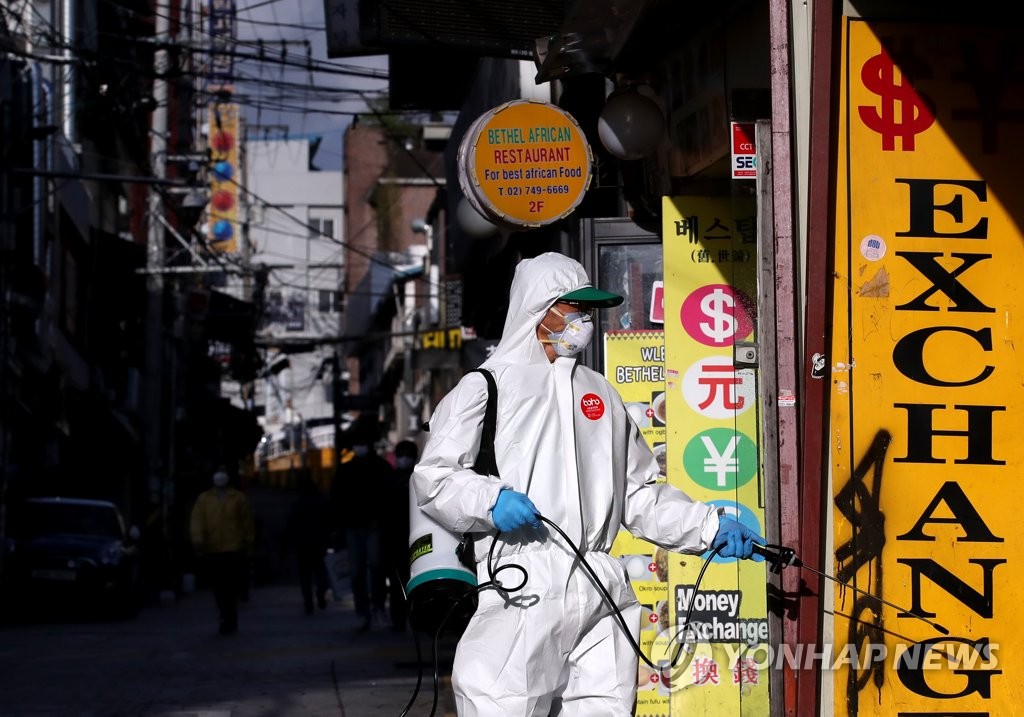 "We need to secure the effectiveness of entry logs," he said in a government response meeting. "Please use information technology to find ways to track visitors at high-risk facilities and (manage) entry logs that are in line with the actual visitor records."

Yoon Tae-ho, a senior health ministry official, said Thursday that the government is looking into several ideas that will "temporarily help collect data within the line of not breaching privacy."