SEOUL, May 19 (Yonhap) -- Starting Tuesday, anybody caught possessing or watching illegally filmed sexual videos could face up to three years in prison under revised laws on the aggravated punishment of digital sex crimes, government officials said.

The government promulgated the revisions of the Criminal Act, the Act on Special Cases Concerning the Punishment, etc, of Sexual Crimes, and the Act on Regulation and Punishment of Criminal Proceeds Concealment, which passed the National Assembly late last month, saying they will immediately take effect.

The latest legal revisions came as the nation has recently been shocked by a string of sexual exploitation cases centered on group chatrooms of the Telegram messenger service.

Under the new laws, people who possess, buy, store or watch illegally filmed obscene materials could face up to three years in prison or a fine of up to 30 million won (US$24,490). 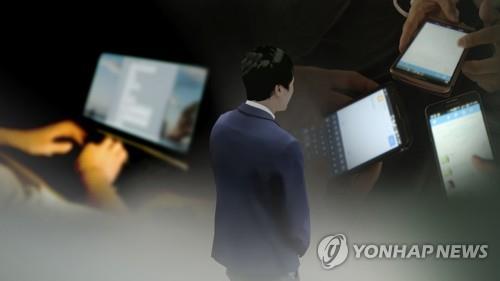 Previously, the possession of illegally filmed sexual footage was not punishable. Only those caught possessing child and youth sexual abuse materials were subject to criminal punishment.

The statutory punishment for the act of producing and distributing sexual abuse materials will rise from imprisonment of up to five years or a fine of up to 30 million won to a prison term of up to seven years or a maximum fine of 50 million won.

Unpermitted distribution of sexual materials produced by abuse victims will also be punishable. The act of threatening and blackmailing with videos of a sexual nature will be punished with prison sentences of up to one and three years, respectively.

The revised Criminal Act also raised the age of sexual consent from the previous 13 to 16. Therefore, anybody caught having sex with minors under 16 will be charged with rape, regardless of consent. When the victim is aged between 13 and 16, only perpetrators aged 19 and over will be punished.

The statutory punishment for sex crimes against minors under the age of 13 will also be strengthened. Indecent assaults on children under 13 will be punished only with more than five years in prison. The statute of limitations for statutory rape and indecent assaults will be abolished from Nov. 20.

The revised laws also stipulate a criminal confiscation system in which all proceeds from illegally filmed and manipulated videos are seized.