SEOUL, May 19 (Yonhap) -- South Korean football chief Chung Mong-gyu has been named one of the sport's most influential figures.

The Korea Football Association (KFA) said its president ranked 30th on the list of 50 most influential people in football, as compiled by the France Football magazine. The prestigious weekly magazine is also famous for presenting the Ballon d'Or Award to the top football player each year.

The magazine noted that Chung, in addition to leading the KFA, is a vice president of the Asian Football Confederation and a former member of FIFA Council, and recognized his contribution to raising South Korean football's profile internationally. 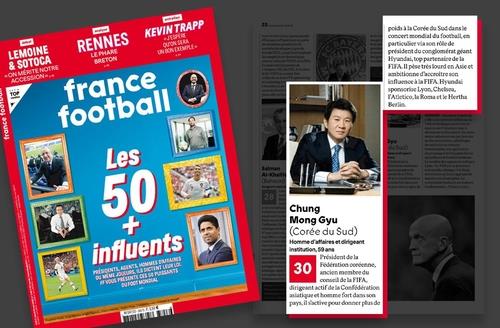