SEOUL, May 20 (Yonhap) -- South Korea's household debt grew at the slowest pace in one year in the first quarter, central bank data showed Wednesday, amid a sharp decline in spending apparently caused by the new coronavirus outbreak that is expected to hurt the whole economy.

Outstanding household credit came to 1,611.3 trillion won (US$1.31 trillion) as of the end of March, up 11 trillion won from a revised 1,600.2 trillion won tallied three months earlier, according to preliminary data from the Bank of Korea (BOK). 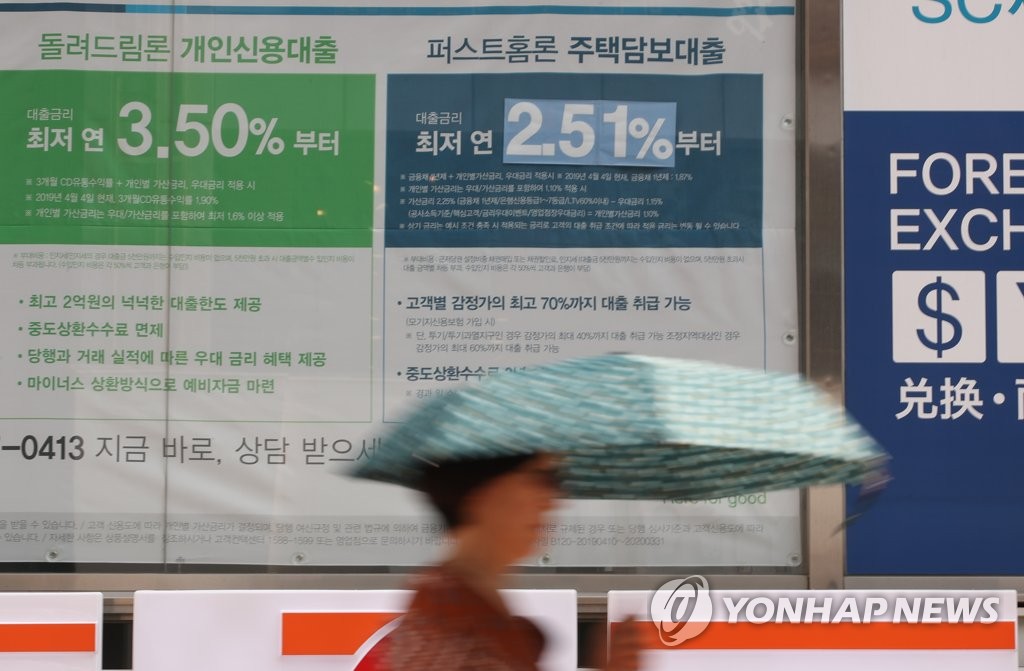 The reading marks a sharp slowdown from a 27.7 trillion-won on-quarter increase in the previous quarter. It also marks the slowest on-quarter growth since the first quarter of 2019, when household credit added 3.2 trillion won on a quarterly basis.

In the January-March period, outstanding household debt extended by banks and other financial institutions amounted to 1,521.7 trillion won, up 17.2 trillion won from end-December.

The increase again marks a slowdown from a 23.1 trillion-won gain in the fourth quarter of last year.

Outstanding credit spending came to 89.6 trillion won as of end-March, slipping 6.1 trillion won from three months earlier and marking a turnaround from a 4.6 trillion-won gain in the previous month.

The 6.1 trillion-won drop also marks the sharpest on-quarter decline since the BOK began compiling such data in 2003.

The central bank largely attributed the slowing increase in household credit to a drop in non-mortgage loans.

"The rise in home-backed loans accelerated from the previous quarter due to an increase in home transactions, but the rate of increase in other loans sharply slowed due to seasonal factors and a cut in credit loans from securities firms," it said.

The slowdown in the overall rise in household debt, however, follows the outbreak of the new coronavirus.

Earlier reports said the country's credit card spending dropped 4.3 percent from a year earlier in March, the steepest on-year decline since such data began to be compiled in 2005.

Many others expect the South Korean economy to shrink this year with the International Monetary Fund forecasting a 1.2 percent on-year contraction for the local economy.