SEOUL, May 20 (Yonhap) -- The SK Wyverns are on the verge of tying a franchise record that they'd rather not match: the longest losing streak of 11 games.

The Wyverns dropped their 10th straight game Tuesday night against the Kiwoom Heroes, falling 11-6 after giving up six runs in the bottom of the first at Gocheok Sky Dome in Seoul.

They dropped to 1-11 for the Korea Baseball Organization (KBO) season, last place among 10 teams. It's hard to believe that this is the mostly same club that finished last year's regular season in second place, a couple of offseason departures notwithstanding. 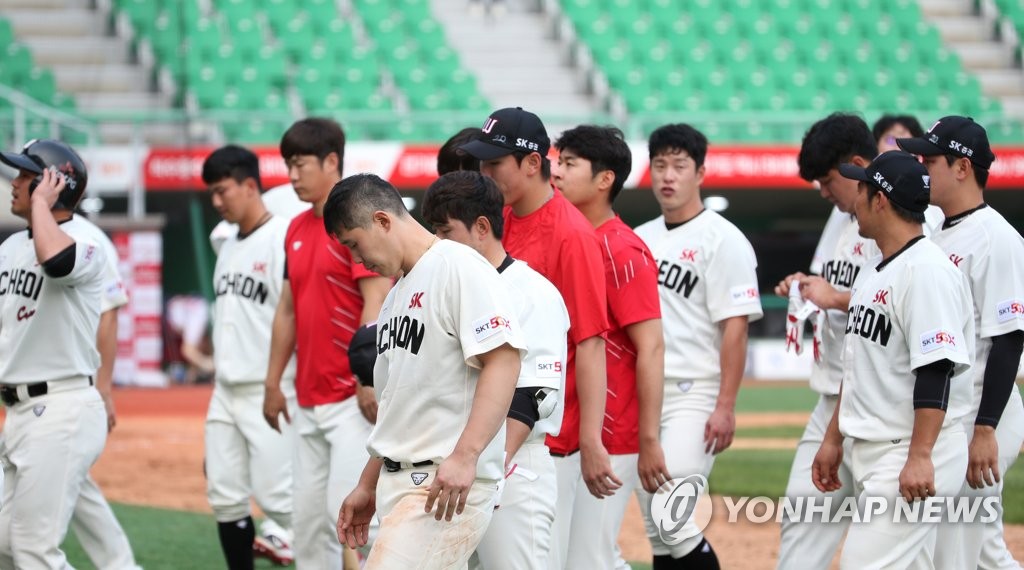 One of the new faces on the mound, Ricardo Pinto, was roughed up for eight runs -- seven earned -- on nine hits in 4 1/3 innings.

Infield defense, as has often been the case this season, let the Wyverns down. Compounding the problem was Pinto's worrisome inability to pitch around defensive miscues.

With one out and men at second and third, Kiwoom's ever-dangerous cleanup Park Byung-ho hit a groundball to shortstop Jung Hyun. Instead of getting the sure out at first, Jung made an ill-advised throw to home plate. Running in from third, Kim Ha-seong was safe at home, and the call stood after the Wyverns' replay challenge.

Lee Ji-young, the next batter, hit a grounder to Kim Chang-pyeong, who made the grab and threw to Jung to start an inning-ending double play. But Jung dropped the routine toss, allowing another runner to cross the plate. The Heroes ended up batting around in that first inning and jumped out to a 6-0 lead.

The Wyverns responded with four runs in the top of the second, the first time all season they scored that many runs in a single frame, as they turned a potential blowout into a more manageable game, down just 6-4. Another SK run in the third made things even more interesting at 6-5. 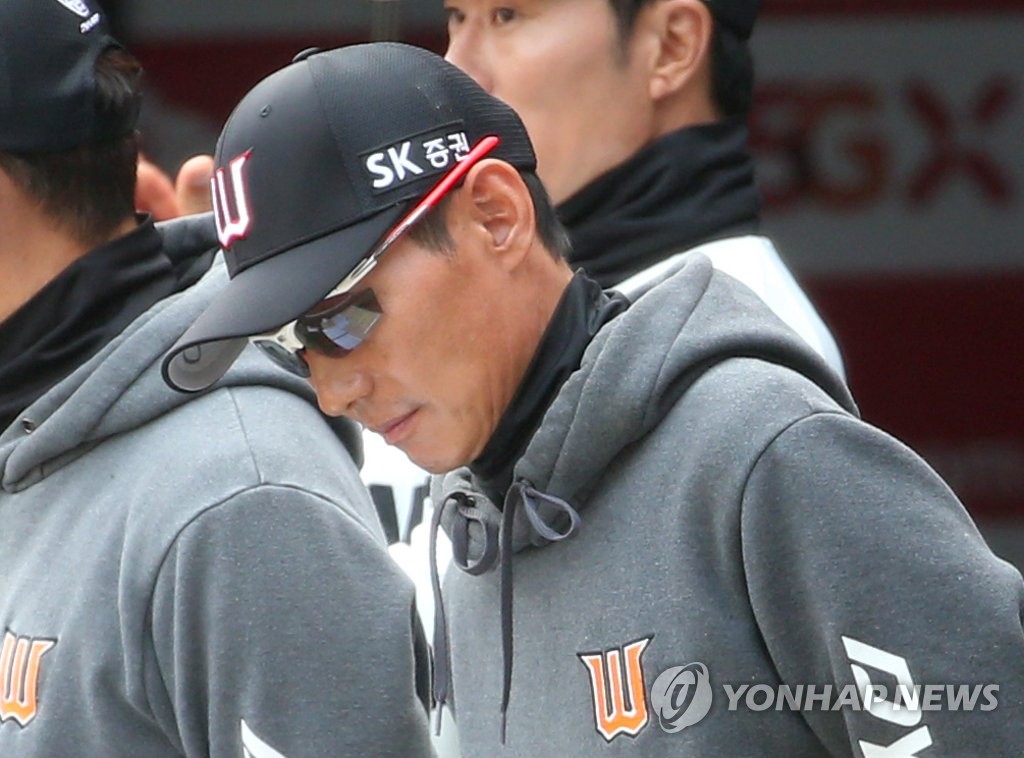 But the Wyverns' bullpen failed them, with manager Youm Kyoung-youb making a particularly head-scratching move in the bottom fifth.

Pinto gave up back-to-back singles with one out in that inning, and Youm summoned right-hander Kim Ju-han.

Kim had given up four earned runs over his first two appearances of the season, covering one inning. He didn't seem to be an ideal choice to keep this a one-run game with the top of the Heroes' lineup coming up.

Kim hit the first batter he faced, No. 9 hitter Park Jun-tae, after falling behind 2-0 in the count. Kim then gave up a single to Seo Geon-chang that plated two more runs.

Facing Kim Ha-seong, Kim Ju-han threw a wild pitch that wasn't in the same area code as the home plate, before walking the batter to load the bases.

Pitching coach Choi Sang-duk visited the mound for a quick chat, but whatever advice Choi gave Kim, it didn't work. The pitcher, looking positively overwhelmed, walked Lee Jung-hoo to let in a run for a 9-5 deficit.

The Wyverns finally pulled Kim, and new right-hander Park Min-ho came on to clean up the mess in the fifth. He pitched a clean sixth inning, too, leading many to wonder if Youm wouldn't have been better off to go with Park as the first guy out of the bullpen. 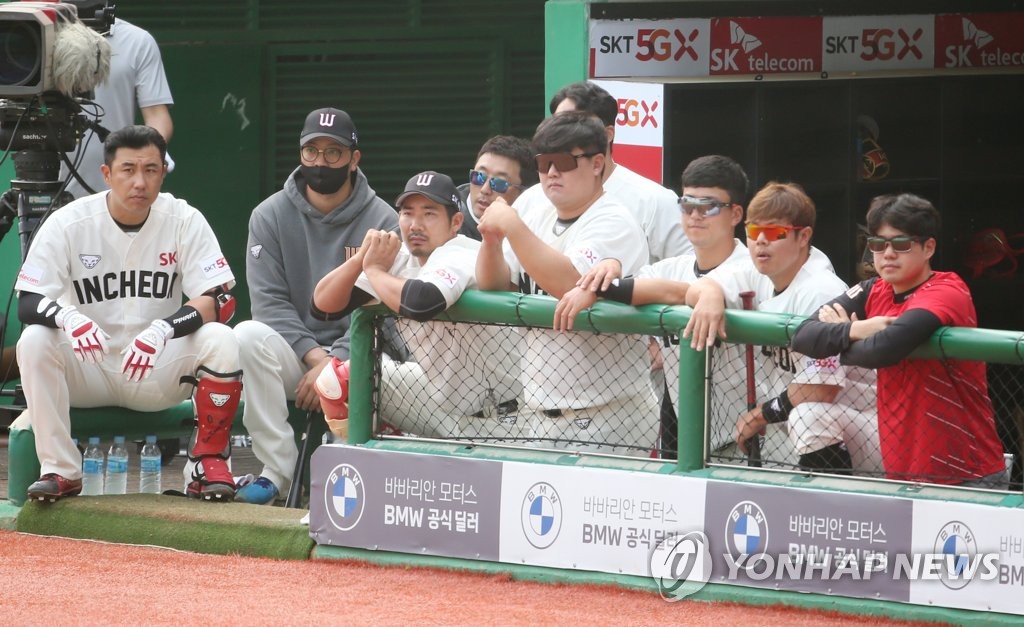 Perhaps some regression was to be expected for the Wyverns, who lost two aces, Kim Kwang-hyun and Angel Sanchez, from last year's rotation. In three starts, Pinto has a 6.32 ERA, and eight of the 19 runs he's allowed have been unearned. Nick Kingham, the other foreign starter, has gone 0-2 with a 6.75 ERA and is currently on the injured list with elbow issues. Losing starting catcher Lee Jae-won and outfielder Ko Jong-wook to injuries early in the season hasn't helped.

Problems are multi-faceted for the Wyverns. By ERA, they have the KBO's worst bullpen (7.97) and second-worst pitching staff (6.11). At the plate, they have the lowest team on-base plus slugging percentage (OPS) with .644 and fewest runs scored with 40. They also rank near the bottom in multiple advanced fielding statistics, as compiled by Statiz.

Submarine starter Park Jong-hun will try to stop the bleeding Wednesday night against the Heroes.