The inaugural meeting of the high-level dialogue, held earlier in the day, brought together the leaders of the two main umbrella labor unions -- the Korean Confederation of Trade Unions and the Federation of Korean Trade Unions -- the chairmen of the two major business lobbies, including the Korea Chamber of Commerce and Industry, and the finance and labor ministers under the leadership of Prime Minister Chung Sye-kyun.

Top-level officials from the presidential committees on economy and employment also joined the meeting, aimed at making trilateral efforts to prevent an economic crisis amid the pandemic.

The dialogue is the first that brings together the leaders of the two major umbrella unions with the corporate and government leaders for discussion and cooperation since 1998 when the country was grappling with a massive financial crisis.

"The launch (of the trilateral dialogue) was arranged after Prime Minister Chung suggested joint discussion among the three parties to overcome an unprecedented economic and employment crisis due to COVID-19," according to the prime minister's office.

"The direct impact of the virus on our economy, livelihood and employment is so big that it is absolutely critical for labor, management and the government to cooperate to safeguard secure employment," Chung told the meeting. 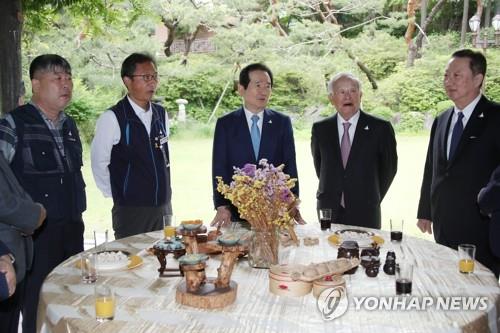