SEOUL, May 20 (Yonhap) -- Eight in 10 South Korean households have received emergency disaster relief funds now being paid by the government to the whole country to cope with the economic impact of the coronavirus outbreak, the Ministry of the Interior and Safety said Wednesday.

By Tuesday, 17.28 million, or 79.6 percent, of the nation's 21.71 million households had been paid the unprecedented one-off handouts, the ministry said. 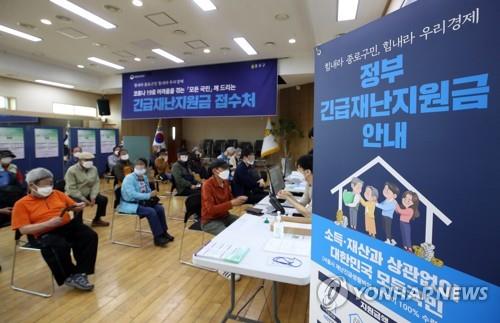 Households failing to apply for the emergency relief funds by the deadline will be regarded as donors to the state. Recipients must spend the money by Aug. 31 or it will also be deemed a donation.

On Tuesday, about 1.3 million households made applications for 834.9 billion won, marking a decline from a daily average of about 2 million applications during the previous week.