SEOUL, May 20 (Yonhap) -- As a dozen teachers lined up at the gate of Seoul Technical High School in eastern Seoul on Wednesday morning, the masks covering half their faces could not hide their delight as they welcomed students back after a long closure imposed due to the new coronavirus.

"Hi, kids. Happy to have you back," a teacher said while greeting pupils as they streamed into the school a few meters apart from each other.

"Long time no see, sir. It's hard to recognize you because of the mask," one student replied.

Around 440,000 high school seniors were the first group to attend in-person classes and younger students will return to school in stages by June 8. 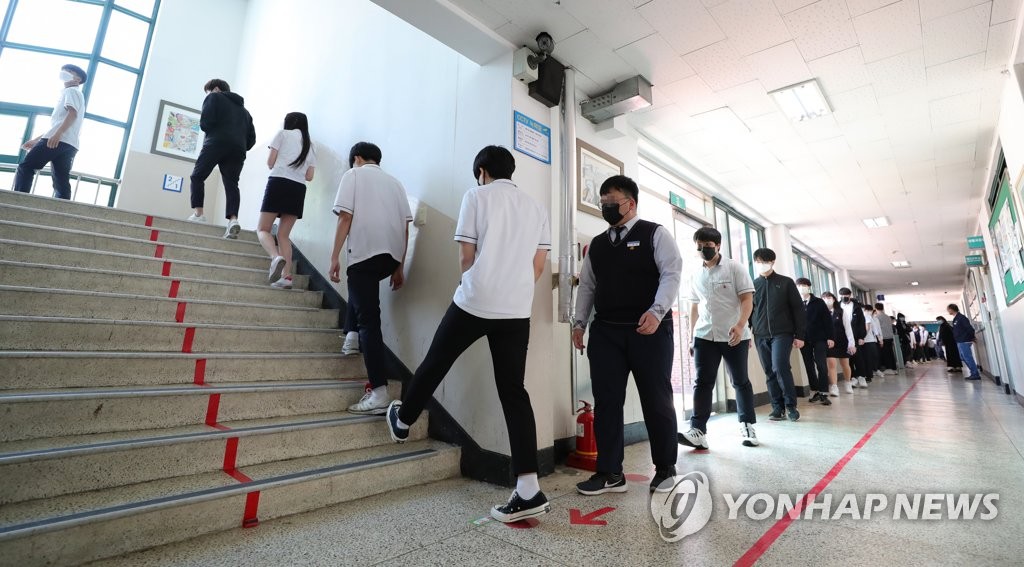 Schools have prepared for the reopening with extra sanitary measures and strict distancing guidelines.

Inside the campus of Seoul Technical High School, the students were instructed to walk between red parallel lines marked on the ground to keep them from coming into contact.

A thermal imaging camera was placed at the entrance of the main building to check the temperatures of all students and teachers.

In the classroom, desks were arranged at intervals of one meter and a bottle of hand sanitizer was placed on the podium.

Teachers reminded them of some key rules they are required to follow to protect against infection.

"It's nice to come to school after a long time, but I'm worried because teenagers largely do not show symptoms when infected with the coronavirus," a student said.

Tables in the cafeteria were rearranged so that all students sit facing one direction and maintain a safe distance.

"Normally it can accommodate about 500 students at once. But now only about 130 students can sit here simultaneously," a school official said. 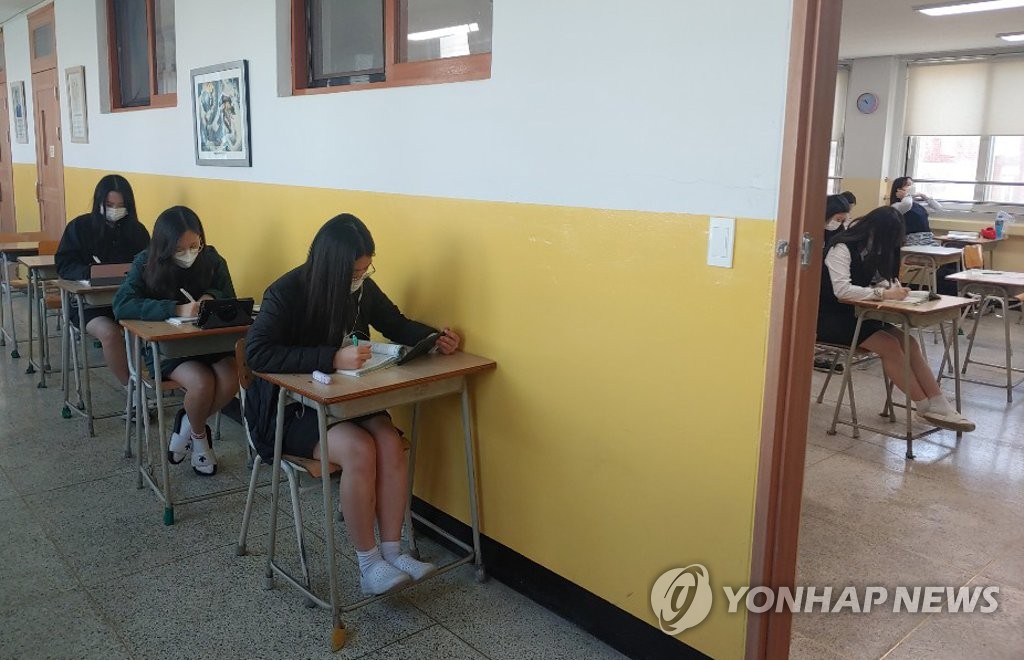 Kyungbock High School in central Seoul also opened its doors to about 250 senior students. They received temperature checks and sterilized their hands before entering the classroom. Unused items have been taken out of classrooms to make space for students to spread out.

Students mostly welcomed the reopening as they reunite with classmates and can now better prepare for the crucial university entrance exam set for December.

Schools have offered remote learning since early April but many students raised complaints about the quality of online lectures.

"Online classes were not bad, but I felt somewhat loose," Lee Min-woo, a student of the school said.

There are still worries that schools are opening too early, following a recent spike in infections tied to nightclubs in Itaewon, a nightlife area of Seoul.

Some students at Kyungbock notified the school in advance that they would not attend.

"My parents were a little worried about going to school, and I think online classes are safer," Kim Hyung-jun of the same school said.

In Incheon, west of Seoul, all students at 66 high schools were sent home in the morning after two students were confirmed to have contracted the virus.

Incheon has reported a total of 136 cases, including 27 patients traced to a teacher at a private cram school. 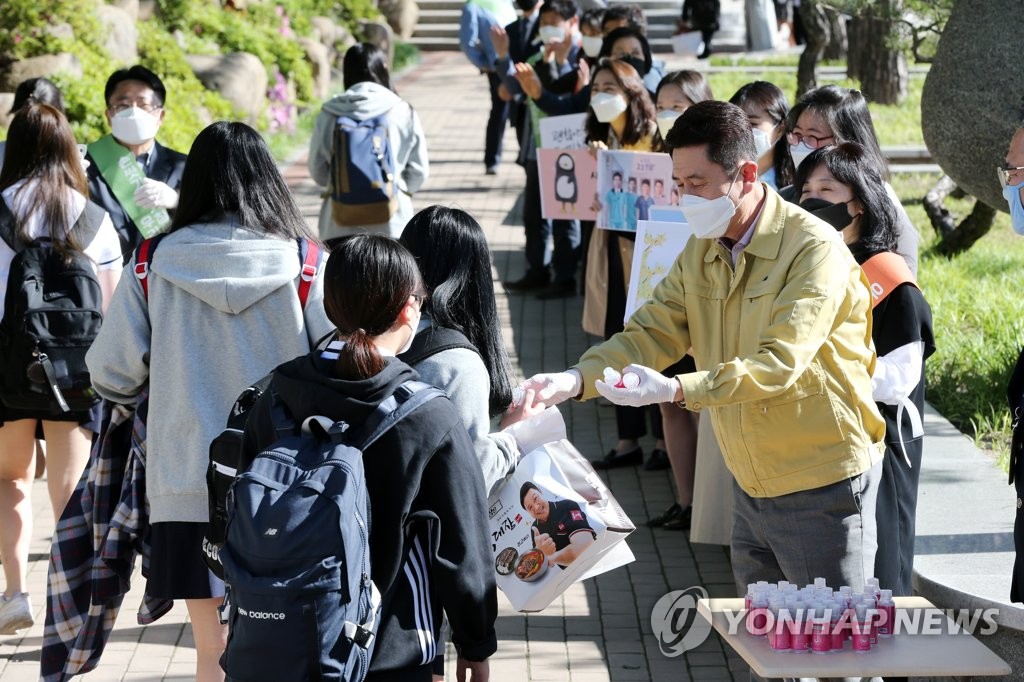 Small schools with fewer than 60 students in sparsely populated areas were also allowed to reopen Wednesday. including Chugok Elementary School in Chuncheon, 85 kilometers east of Seoul.

"I'm so happy to be with my friends and teachers again. I've been playing with my younger brother and I've missed my friends so much," said Lee Yeol-mae, an eight-year-old sophomore at the school, which has a total of 12 students.

The school decided to reopen early as most of the parents are farmers and could not properly care for their children during the day, a school official said. 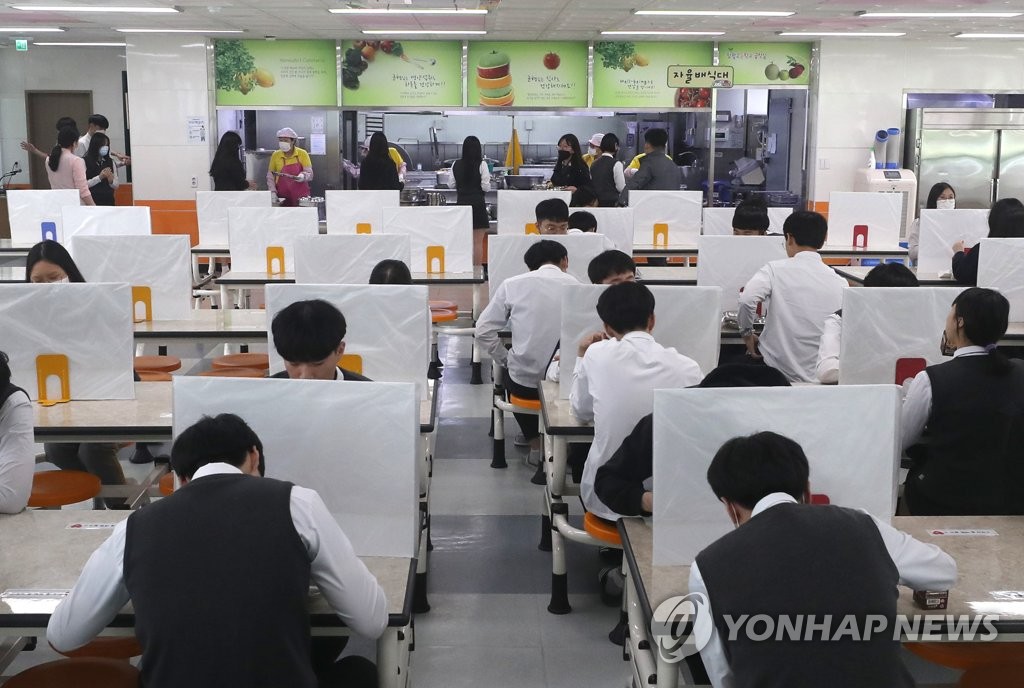