SEOUL, May 20 (Yonhap) -- South Korea's state pension fund said Wednesday that it will strive for a 5.2 percent return rate on its investments in the 2021-2025 period by increasing overseas stock and bond holdings.

The target set by the National Pension Service's (NPS) Fund Management Committee calls for the proportion of overseas holdings to reach around 55 percent of the total, with stocks making up 35 percent and bonds and alternatives that cover real estate, energy and infrastructure accounting for 10 percent each.

"The goal is to secure stability while at the same time maximizing profits through diversification of the fund's portfolio," the management committee, which approves all investment plans for the pension service, said. It added that the decision is in line with the current strategy of gradually expanding holdings in risky and overseas assets that can generate more profits.

More profits can be used to guarantee stable income for the elderly after retirement and provide coverage for disabilities.

The NPS, one of the three largest pension fund operators in the world with assets reaching 737.4 trillion won (US$599 billion) as of February of this year, registered a preliminary return rate of minus 0.45 percent at the end of that month, with the poor showing blamed on slumping domestic and overseas stock markets. This represents a sharp turnaround from a record yield of 11.3 percent last year.

In addition to increasing its overseas presence, the NPS will raise the proportion of holdings in stocks and alternatives to 65 percent of the total in the five-year period.

It said that by the end of 2025 the goal is to have around 50 percent of its investments in foreign and local stocks, with alternatives accounting for 15 percent and bonds standing at 35 percent. 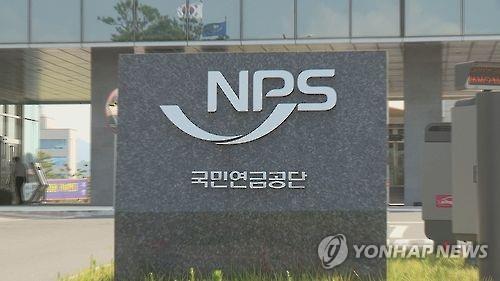