With the coronavirus outbreak raging across the globe, many affected countries are scrambling to import South Korean COVID-19 test kits, in a boon to local manufacturers.

According to the Ministry of Food and Drug Safety, 72 test kits manufactured by 46 companies have been approved for exports. The figure includes six products that have won approval for emergency use locally.

Sugentech Inc. has signed 60 billion won (US$49 million) worth of deals to export coronavirus test kits since April 1, which dwarfs its 2019 sales of 3.8 billion won.

In April alone, the company shipped test kits worth 10 billion won, and it has been producing 2 million kits per week this month. 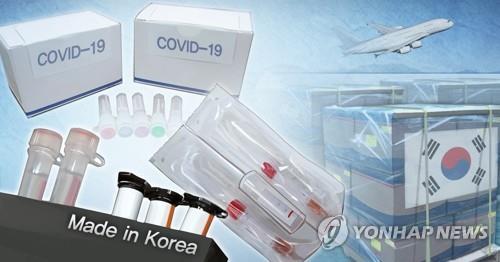 Sugentech has secured deals to export kits that will be produced by June, a company official said, adding shipments will likely increase further in the second quarter of the year.

Another industry player, Seegene. Inc., said its first-quarter sales came to 70 percent of its revenue for all of 2019, with operating and net profits already exceeding those of last year. The company did not provide exact figures.

So far, Seegene has exported kits capable of conducting 20 million tests to 60 countries. The company recently inked a deal to export test kits to Brazil through a body under the World Health Organization and expected more exports in the coming months.

Bioneer Corp. has also signed a deal to export COVID-19 test kits and related equipment worth 6.8 billion won to Indonesia.

Bioneer, which saw its first-quarter sales surge 1.9 times from a year ago, struck deals to supply test kits to Gabon and Lebannon in April.

Export figures are a testament to high overseas demand for South Korean test kits. The value of test kit exports came to $201.2 million in April, a more than eightfold jump from $24 million in March, according to the data from the Korea Customs Service.

In the first four months of this year, South Korea exported $225 million worth of coronavirus test kits to a total of 103 nations.
(END)