SEJONG, May 21 (Yonhap) -- South Korea's household income rose in the first quarter from a year earlier, but the income gap between the haves and have-nots widened, as the employment situation of the low-income bracket worsened amid the coronavirus pandemic, a report showed Thursday.

The average household earned 5.35 million won (US$4,357) per month in the first quarter, up 3.7 percent from the previous year, according to the report by Statistics Korea.

The average monthly income of the bottom 20 percent income bracket was unchanged at 1.49 million won in the first quarter.

In contrast, households in the upper 20 percent income range earned 11.15 million won per month in the first quarter, up 6.3 percent from a year earlier.

Consequently, the country's distribution ratio for disposable income, a key barometer of earnings equality, reached 5.41 in the first quarter, up 0.23 percentage points from a year earlier. A bigger ratio means increased inequality in income distribution. 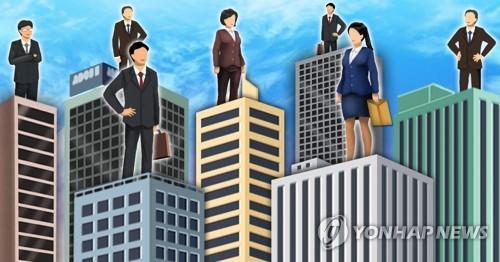 Finance Minister Hong Nam-ki told a meeting with economy-related ministers that the income gap is expected to further widen in the second quarter, as the pandemic has taken a heavy toll on part-time and freelance jobs.

Hong said the government will make utmost efforts to prevent the income gap from worsening.

The government will also spare no efforts for a faster post-pandemic economic recovery and job creation, Hong said.

Last week, the government said it aims to create 1.56 million jobs in the public sector, as the nation's economy suffered its sharpest job losses in 21 years over the coronavirus pandemic.