SEOUL, May 21 (Yonhap) -- Air Busan Co., a low-cost affiliate of Asiana Airlines Inc., said Thursday it will resume flights on international routes from July as the new coronavirus outbreak has passed its peak.

Air Busan plans to resume services on routes from the southern port city of Busan to Hong Kong and Macao on July 1 and gradually reopen routes to China, Japan and Southeast Asia, the company said in a statement.

The budget carrier has suspended all of its international flights since March 8 as countries strengthen entry restrictions on incoming passengers amid virus fears. 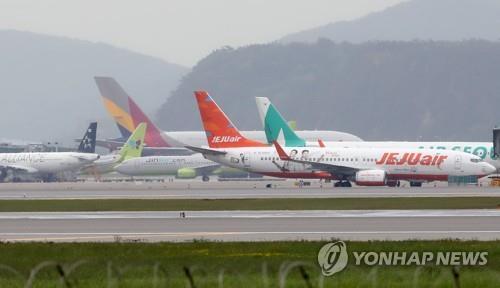 Jeju Air, South Korea's biggest budget carrier, currently flies on routes to Tokyo, Osaka, and Weihai, though there is only a small number of incoming passengers.

Still, officials from other budget carriers remain cautious about the resumption of international flights as it is uncertain whether the COVID-19 virus will slow down by June.

Jin Air, a budget carrier affiliate of Korean Air Lines Co., said it has no plan to resume flights from July as it remains to be seen whether countries will ease or lift entry restrictions on incoming passengers.

Eastar Jet, T'way Air Co. and Fly Gangwon have suspended all of their flights on international routes.

On the full-service carrier front, Korean Air and Asiana have suspended more than 90 percent of their flights on long-haul routes since March.

The country's two biggest carriers plan to resume flights on dozens of their international routes from June as they prepare for increased travel demand after countries ease entry restrictions.

Air Busan to resume flights on int'l routes in July

Air Busan to resume flights on int'l routes in July