SEOUL, May 21 (Yonhap) -- North Korea's official newspaper denied its leaders can magically contract space, a long tradition used to idolize founder Kim Il-sung and late leader Kim Jong-il, in the latest sign of a change in the regime's myth-making efforts.

The Rodong Sinmun, the organ of the North's ruling party, carried an article on Wednesday denying its leaders can practice "chukjibeop," a hypothetical method of folding space and traveling far distances in a short period of time that has been used by the North to deify its leaders.

"In realistic terms, a person cannot suddenly disappear and reappear by folding space," the article said.

On Thursday, an official at South Korea's unification ministry stressed that this new trend of the North Korean leader rejecting the mystification of his forefathers is "noteworthy."

"It appears to stress patriotism and love for the people rather than mystification of the leaders. We will further analyze its implications," the official said.

Since North Korean leader Kim Jong-un failed to reach an agreement in its second summit with U.S. President Donald Trump in Hanoi last year, he has focused on showing more of his "human" side, urging its people to stay away from the mystification of their leader.

"Mystifying a leader's revolutionary activity and appearance would result in covering the truth," Kim was quoted as saying in state media in March last year after the breakdown of the Hanoi negotiations. "Absolute loyalty would spring up when (they) are mesmerized by the leader humanly and comradely." 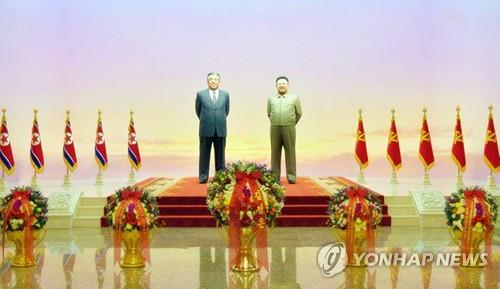